Missoula: Rape and the Justice System in a College Town (Paperback) *SIGNED* by Jon Krakauer

Missoula, Montana, is a typical college town, home to a highly regarded state university whose beloved football team inspires a passionately loyal fan base. Between January 2008 and May 2012, hundreds of students reported sexual assaults to the local police. Few of the cases were properly handled by either the university or local authorities. In this, Missoula is also typical.

In these pages, acclaimed journalist Jon Krakauer investigates a spate of campus rapes that occurred in Missoula over a four-year period. Taking the town as a case study for a crime that is sadly prevalent throughout the nation, Krakauer documents the experiences of five victims: their fear and self-doubt in the aftermath; the skepticism directed at them by police, prosecutors, and the public; their bravery in pushing forward and what it cost them. These stories cut through abstract ideological debate about acquaintance rape to demonstrate that it does not happen because women are sending mixed signals or seeking attention. They are victims of a terrible crime, deserving of fairness from our justice system. Rigorously researched, rendered in incisive prose, Missoula stands as an essential call to action.

“Excellent. . . . Krakauer doesn’t just tell the story of these crimes. As he has done so brilliantly in his other books . . . he sets the story firmly in the context of social history.” —The Boston Globe

“Jon Krakauer began his career as an author of taut, finely reported outdoor adventures; seven books later, he emerges as the conscience of a nation.” —The Christian Science Monitor

“Missoula will be a touchstone of any future correction to the rape culture we live in.” —Minneapolis Star Tribune

“Jon Krakauer began his career as an author of taut, finely reported outdoor adventures; seven books later, he emerges as the conscience of a nation. . . . Investigative reporters—and Krakauer is one of the craft’s finest practitioners, diligent, dogged, and artful—are nothing so much as trial attorneys with pens rather than costly silk ties.” —The Christian Science Monitor

“Compelling. . . . Meticulous. . . . Krakauer is a writer committed above all else to asking difficult questions. . . . [A] timely and important book.” —Los Angeles Times

“Meticulously reported, fascinating and deeply disturbing. . . . By probing the specific, Krakauer illuminates upsetting generalities. . . . Krakauer—a journalist who is also a compelling writer—artfully keeps the books from becoming a compendium of facts. . . . It’s an important, difficult and timely subject.” —USA Today 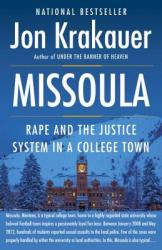