The Heart of the Buddha: Entering the Tibetan Buddhist Path (Bargain)

In The Heart of the Buddha, Chögyam Trungpa examines the basic teachings of Buddhism and places them within the context of daily life. Divided into three parts, the book begins with a discussion about the open, inquisitive, and good-humored qualities of the “heart of the Buddha”—an “enlightened gene” that everyone possesses. Next, Chögyam Trungpa moves to the stages of the Buddhist path, presenting the three vehicles—Hinayana, Mahayana, and Vajrayana—that carry the Buddhist practitioner toward enlightenment. Finally, he describes the direct application of Buddhist teachings to topics as varied as relationships, drinking, children, and money.

The Heart of the Buddha reflects Trungpa’s great appreciation for Western culture and deep understanding of the Tibetan Buddhist tradition, which enabled him to teach Westerners in an effective, contemporary way.

Chögyam Trungpa (1940–1987)—meditation master, teacher, and artist—founded Naropa University in Boulder, Colorado, the first Buddhist-inspired university in North America; the Shambhala Training program; and an international association of meditation centers known as Shambhala International. He is the author of numerous books including Shambhala: The Sacred Path of the Warrior, Cutting Through Spiritual Materialism, and The Myth of Freedom.

“Trungpa uses unexpected and surprising imagery which is often visceral and always striking.  I found reading these articles induced an experience not unlike that of digging out old rock music and being struck by its fresh energy and imagination.”—Wildmind.org 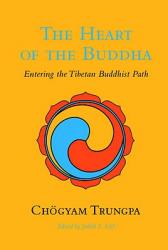