Bleed into Me: A Book of Stories (Native Storiers: A Series of American Narratives) (Paperback) *SIGNED* by Stephen Graham Jones

We stare at each other because we don't know which tribe, and then nod at the last possible instant. Standard procedure. You pick it up the first time a white friend leads you across a room just to stand you up by another Indian, arrange you like furniture, like you should have something to say to each other. As one character after another tells it in these stories, much that happens to them does so because "I'm an Indian." And, as Stephen Graham Jones tells it in one remarkable story after another, the life of an Indian in modern America is as rich in irony as it is in tradition. A noted Blackfeet writer, Jones offers a nuanced and often biting look at the lives of Native peoples from the inside. A young Indian mans journey to discover America results in an unsettling understanding of relations between whites and Natives in the twenty-first century, a relationship still fueled by mistrust, stereotypes, and almost casual violence. A character waterproofs his boots with transmission fluid; another steals into Glacier National Park to hunt. One man uses watermelon to draw flies off poached deer; another, in a modern twist on the captivity narrative, kidnaps a white girl in a pickup truck; and a son bleeds into the father carrying him home. Rife with arresting and poignant images, fleeting and daring in presentation, weighty and provocative in their messages, these stories demonstrate the power of one of the most compelling writers in Native North America today.

Stephen Graham Jones is an assistant professor of English at Texas Tech University. He is the author of the novels The Fast Red Road: A Plainsong, All the Beautiful Sinners, and The Bird is Gone: A Manifesto.
Image: 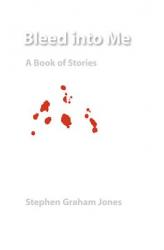