The Blood of the Lion (Hardcover) 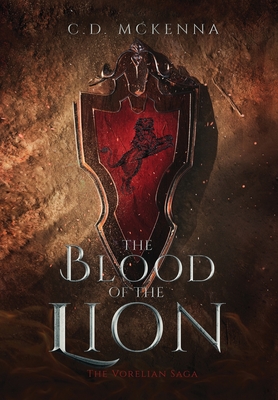 And Syra, Morei, and Cyrus all have something in common: death.

The Demon Killer, once responsible for the Diyrặllian Massacre, has been found after being lost for centuries. Millions of lives fell victim to this treacherous relic . . . and now Syra holds it. Torn from the sanctuary of her home, she must learn to live on the run in search for freedom, hunted by forces known and unknown.

Fate can be cruel, and Morei Geral knows this firsthand. As the king and sole heir to his bloodline, Morei must hide the twisted truth of who he is becoming. But as the king slips further into his curse, war becomes inevitable, and he will have to make a choice that could undo everything he's worked for.

Meanwhile, as chaos rages and fear grips the heart of all, attention is turned on the first Dragon Rider to rise in nearly eight centuries. Cyrus wants nothing to do with prophecies and war. But he will protect his dragon, Sozar, above all else. His only choice is to cast aside the life he once knew and traverse the mysterious Releuthian Mountains, said to be the home of the God of Darkness himself.

Everyone has a destiny. No one can be trusted.

Not even the Gods.