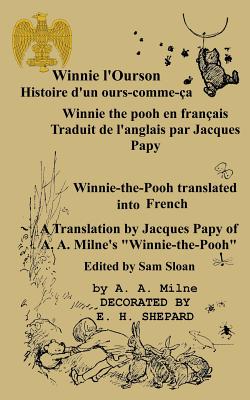 A Translation of A. A. Milne's Winnie-the-Pooh

Translated into French by Jacques Papy

Ishi Press has reprinted translations of Winnie-the-Pooh into 33 languages thus far. We have published it in Afrikaans, Armenian, Bengali, Bulgarian, Chinese, Croatian, Czech, Danish, Dutch, Esperanto, Finnish, French, German, Greek, Hungarian, Icelandic, Italian, Japanese, Korean, Latvian, Persian, Polish, Russian, Serbian, Spanish, Swedish, Turkish, Yiddish, Hindi, Urdu, Khowar, Kalasha and Latin. We have six more languages lined up. This translation into French is part of project to translate Winnie-the-Pooh into other languages. The idea is children need to learn to read at an early age and the best way to teach them to read is to provide reading materials that they find interesting. Children around the world laugh when they see Winnie-the-Pooh saying and doing silly things. Since Winnie-the-Pooh is the most popular children's book world-wide, translating this book into the different languages of the world will be conducive to teaching children to read in those languages.