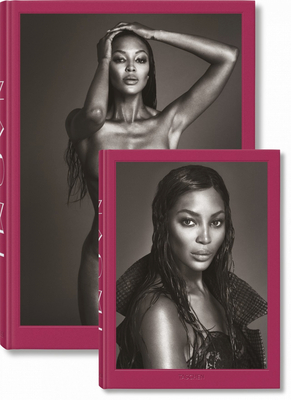 Supermodel, entrepreneur, activist, provocateur. Since her teenage rise to stardom, Naomi Campbell has dazzled the world with her looks, her strength, and her irrepressible spirit. The first black model to grace the cover of French Vogue and TIME magazine, she has been the face of hundreds of magazine covers, countless editorials and advertising campaigns, and a favorite subject for some of the best photographers of the '80s, '90s, and today.Originally published as a signed Collector's Edition of just 1,000 copies, this book gathers the very best of Campbell's portfolio in an updated unlimited XL edition. It features photographs from the likes of Mert Alas and Marcus Piggott, Richard Avedon, Anton Corbijn, Steven Meisel, Helmut Newton, Herb Ritts, Paolo Roversi, Ellen von Unwerth, and Bruce Weber, and includes such unforgettable shoots as Peter Lindbergh's sequence of Naomi dancing as Josephine Baker on the beach for Italian Vogue and Jean-Paul Goude's stunning composition of the model racing against a cheetah for U.S. Harper's Bazaar.

The collection also features texts written by Naomi exclusively for this publication alongside magazine covers, ads, video stills, and more. Naomi recalls her childhood; the beginning of her modeling career; working with fashion's greatest designers, including Azzedine Ala a, John Galliano, Marc Jacobs, Karl Lagerfeld, Gianni Versace; and her meteoric rise to superstardom. Photographer biographies and an illustrated appendix are also included.First published as a signed Collector's Edition, now available in an unlimited and updated XL edition