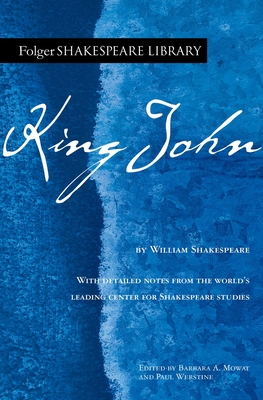 By William Shakespeare, Dr. Barbara A. Mowat (Editor), Ph.D. Werstine, Paul (Editor)
$9.99
On Our Shelves Now. Click on the title to see details.

The authoritative edition of King John from The Folger Shakespeare Library, the trusted and widely used Shakespeare series for students and general readers.

Like most of Shakespeare’s history plays, King John presents a struggle for the English crown. The struggle this time, however, is strikingly cold-blooded and brutal.

John, the younger brother of the late Richard I, is the king, and a savage one. His opponent is a boy, his nephew Arthur, supported by the King of France and the Duke of Austria. After Arthur falls into John’s hands, John plots to torture him. Arthur’s capture gives Louis, the Dauphin of France, the opportunity to lay claim to John’s crown. John’s nobles support Louis, but he schemes to betray them.

The play finds its hero in another figure: the Bastard, Sir Richard Plantagenet, an illegitimate son of Richard I. Although he has an appetite for war, he also has a strong conscience and speaks with trenchant irony.

This edition includes:
-Freshly edited text based on the best early printed version of the play
-Full explanatory notes conveniently placed on pages facing the text of the play
-Scene-by-scene plot summaries
-A key to the play’s famous lines and phrases
-An introduction to reading Shakespeare’s language
-An essay by a leading Shakespeare scholar providing a modern perspective on the play
-Fresh images from the Folger Shakespeare Library’s vast holdings of rare books
-An annotated guide to further reading