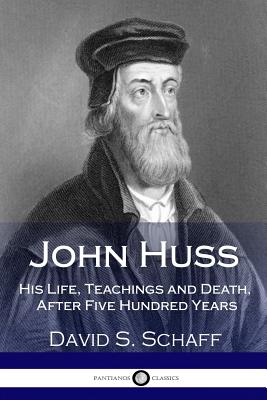 David S. Schaff's biography of the Czech priest Jan Hus - whose name is commonly anglicized as John Huss - is eye-opening and detailed, shedding light upon the philosophy and conflicts which led to Huss's execution.
Born into an era of immense religious fervor, Huss quickly distinguished himself with a commitment to Christian studies. His youth was spent singing in churches, where he made a subsistence income from donations. His intellectual abilities proven, he was an early attendant of the University of Prague where he acquired degrees. He quickly translated writings of John Wyclif, who himself (illegally in church law) translated the Bible to Middle English.
Perceiving immorality on the part of certain clerics, priests and bishops, Huss publicly condemned and ridiculed these moral failings. Events took a tumultuous turn when the Papal schism resulted in two claims for the Papacy, which threw the Catholic church into chaos. Huss's criticisms grew, and so did the number of enemies he had in the church.
Attempts were made by the sympathetic King Wenceslaus IV of Bohemia to reconcile Huss, and the conflicting factions of the church. However, Huss stood by his disapproval of the church, and was eventually brought to trial and himself condemned with a series of spurious allegations. Put to death by burning at the stake, John Huss's demise greatly increased opposition to the Catholic creed in Bohemia and beyond, and began the Hussite Wars.
Today, Huss is - alongside John Wyclif - attributed as a precursor to the Protestant Reformation. His writings were read and published by Martin Luther, who sympathized with Huss's treatment at the hands of the church. Philip S. Schaff narrates his biography with a studious eye - this edition includes Schaff's original notes, which themselves reference Medieval texts.