Occupied: Vienna is a Broken Man & Daughter of Hunger (Paperback) 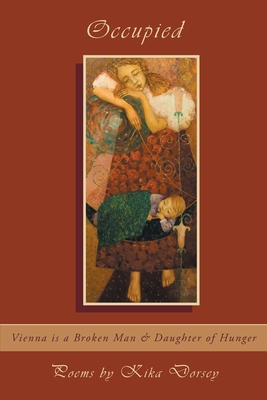 In Kika Dorsey's newest book of poetry, Occupied: Vienna is a Broken Man and Daughter of Hunger, the reader encounters a landscape ravaged by war and joins a cast of survivors.

"Paint me, Mother," Dorsey writes, "find me in the basement rummaging through everything I thought/I'd never find--" speaks to how the poet first conceived this project. While inspired by the stories of her own Austrian ancestry, Dorsey broke from her generally more autobiographical tradition seen in past works (Beside Herself, Coming Up for Air, and Rust) by taking a more erudite approach. Flexing her academic muscles Dorsey dives into her research to then deliver an ensemble of characters she crafted from history and her imagination. These girls and women diversify the experience as their stories parallel the stories of Dorsey's matriarchs as they all rise up to fend for themselves during the war and after. While some of these women have fallen from aristocracy, some of them were always poor; there are Jewish women who did and did not survive and there are women who carry the seed of their rapists.

Occupied almost reads like a novel as the vignettes present the opportunity for us to vicariously experience the lives portrayed upon these pages. We bear witness as these characters barter with the soldiers who occupy the land; as they forage the woods for mushrooms and berries to combat hunger; as they disguise their gender on more than one occasion to avoid sexual assault. These poems speak to the evils of war, focusing specifically on those realities women and children face, and these poems beg, "Never again "

If you're a fan of Maggie Smith's glittering details, you'll love Dorsey's descriptions too: there are "eyes big and black as an eclipsed moon," "silhouettes like shadows," and "Monkshood is why witches traverse the sky on brooms." But there is also always her extraordinary use of color, whether it's "rivers of veins blue-green like the Danube" or the red of "raspberries sprinkled with sugar." If you appreciate storytelling poets such as Ai or Marsha De La O, Occupied must be next on your To Read List.

As brutal as the topic is, herbs sprout forth from the rubble, and as our healer, Dorsey turns them into medicine; furthermore, the "hope for spring" repeats throughout as Dorsey reminds us the darkest hour is just before the dawn, and she teaches us how to resurrect from ruin.