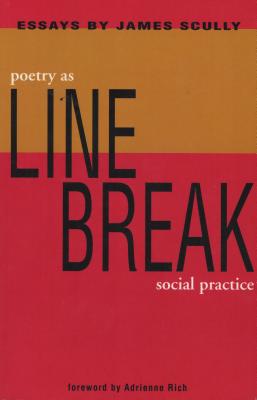 Line Break is the major work on poetry as social practice and a must-read for anyone interested in contemporary criticism or poetry. For many years, James Scully, along with others, quietly radicalized American poetry—in theory and in practice, in how it is lived as well as in how it is written. In eight provocative essays, James Scully argues provocatively for artistic and cultural practice that actively opposes structures of power too often reinforced by intellectual activities.

James Scully is considered one of the most important figures in poetry that engages the reader in social and political issues. Born in 1937 in New Haven, Connecticut, he is the winner of the 1967 Lamont Award and the recipient of a 1973 Guggenheim Fellowship. He spent 1973 and 1974 in Santiago, Chile, on which his book Santiago Poems is based. Over the years, his poetry has appeared in many diverse periodicals. He currently lives in San Francisco.

"James Scully's essays, like his poems, refuse to soothe or simplify, to shortchange either poetry or the imperative for social revolution. His fiercely demystifying intelligence is grounded in hope and realism for poetry in itself along with other forms of dissident engagement."

"Scully's brilliance is mesmerizing, radicalizing, a power plant producing synapses in the 'mind politic' that may well allow Americans, finally, to write and discourse with our kind around the globe. If American poets have a role to play in preserving free speech in the 21st century, this book belongs in our every backpack."

"Line Break is a powerful and internally consistent argument that literature, that poetry in particular, can and must fulfill its ancient duty to register and judge the conduct of human beings. Line Break extrapolates and updates Plato: a poem that does not examine life critically is not worth writing."