One of These Things First (Hardcover) 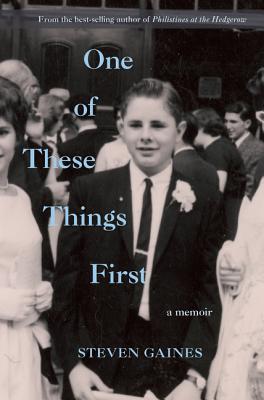 One of These Things First is a wry and poignant reminiscence of a 15 year old gay Jewish boy in Brooklyn in the early sixties, and his unexpected trajectory from a life behind a rack of dresses in his grandmother’s bra and girdle store, to Manhattan’s fabled Payne Whitney Psychiatric Clinic, a fashionable Charenton for wealthy neurotics and Ivy League alcoholics, whose famous alumni include writers, poets, madmen, Marilyn Monroe, and bestselling author Steven Gaines.

With a gimlet eye and a true gift for storytelling, Gaines captures his childhood shtetl in Brooklyn like an Edward Hopper tableau, with all its dramas and secrets: his philandering grandfather with his fleet of Cadillacs and Corvettes; a trio of harpy saleswomen; a giant, empty movie theater, his portal to the outside world; a shirtless teenage boy pushing a lawnmower in front of a house on Long Island; and a pair of tormenting bullies who own the corner candy store whose taunts drive him to a suicide attempt.

Steven Gaines also takes the reader behind the walls of Payne Whitney, the “Harvard of psychiatric clinics,” as Time magazine called it, populated by a captivating group of neurasthenics who subtly begin to change him in unexpected ways. The cast of characters includes a famous Broadway producer who becomes his unlikely mentor, an elegant woman who claimed to be the ex-mistress of newly elected president John F. Kennedy, a snooty, suicidal Harvard architect, and a seductive young Contessa. At the center of the story is a brilliant young psychiatrist who promises to cure a young boy of his homosexuality and give him the normalcy he so longs for. Through it all, Gaines weaves a tale that delights and disturbs with his trademark raconteur panache.

Steven Gaines is the author of Philistines at the Hedgerow: Passion and Property in the Hamptons; The Sky's the Limit: Passion and Property in Manhattan; Simply Halston, the biography of the fashion designer; and co-author of The Love You Make: An Insider's Story of the Beatles, among other books. He's a co-founder of the Hamptons International Film Festival and lives in a small hamlet on the East End of Long Island.

"One of These Things First is not only a departure but an absolute treasure. [Gaines is] a skilled humorist as well as a tender yet trenchant observer of human behavior and the social forces that so often control it."
— New York Times Book Review

"A longtime journalist and artful chronicler of New York lives, Gaines’s look back at his own is shocking, funny, and sometimes shockingly funny. A real treasure."
— Nickolas Butler, internationally bestselling author of Shotgun Lovesongs and The Hearts of Men

"By turns comic, honest, and riveting, Gaines tells a story of a well-meaning shrink and his troubled charge locked in a war of wills to ease the 'trauma of homosexuality' and restore his humanity in a conservative world."
— Publishers Weekly

"This is a memoir for anyone who loves Paddy Chayefsky and Hanya Yanagihara. Steven Gaines has turned his considerable journalistic talents onto his younger self, writing a lyrical, wry and precisely excavated book which zaps you back to that moment when you first wonder, ‘Is this really who I am? What does it mean to not be what I think I’m supposed to be? Can I change?’"
— Carl Swanson, editor New York Magazine

"Growing up gay in pre-trendy Brooklyn wasn't always a joyride, as I personally realized ages ago. But Steven Gaines knows it even better. His harrowing account of being a suicidal 15-year-old who checked into Payne Whitney is eye opening, touching and ultimately triumphant because of how well he turned out."
— Michael Musto, columnist and author of Manhattan on the Rocks

"Years ago Dominick Dunne called Steven Gaines 'a born storyteller.' If anything, we now know Gaines was meant to write his own powerful, heart-wrenching, and funny life story. I could not put it down."
— Steven Petrow, columnist, Washington Post

A poignant and funny book that proves it does get better.
— Joy Behar, "The View"

A beautiful and heart-rending testament . Hard to imagine that in our lifetime we’ve seen such change in the attitudes toward young people. Gaines' irrepressible character comes through loud and clear. Leave it to him to find his way to Payne Whitney, the Harvard of mental joints and then come out of it with honors.
— James Lescene, writer of the Academy-award winning short film, Trevor

PRAISE FOR Philistines at The Hedgerow: “Such a cast of eccentrics hasn't been seen since Midnight in the Garden of Good and Evil.”
— Jay McInerney, The New Yorker

PRAISE FOR The Sky's the Limit: “Juicy and highly detailed, the book has movie stars, fashion designers, illicit sex, and lots of connving and cavorting socialites--and it's all about real estate.”
— Lisa B. Anderson, Chicago Tribune

PRAISE FOR Fool's Paradise: “A fun yarn about a bunch of charming scammers and swindlers with garish tastes..."
— Miami Herald