A Brief History of Nakedness (Hardcover) 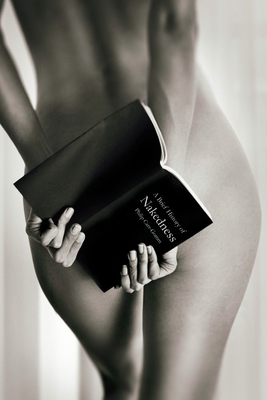 As one common story goes, Adam and Eve, the first man and woman, had no idea that there was any shame in their lack of clothes; they were perfectly confident in their birthday suits among the animals of the Garden of Eden. All was well until that day when they ate from the Tree of Knowledge of Good and Evil and went scrambling for fig leaves to cover their bodies. Since then, lucrative businesses have arisen to provide many stylish ways to cover our nakedness, for the naked human body now evokes powerful and often contradictory ideas—it thrills and revolts us, signifies innocence and sexual experience, and often marks the difference between nature and society. In A Brief History of Nakedness psychologist Philip Carr-Gomm traces our inescapable preoccupation with nudity.

Rather than studying the history of the nude in art or detailing the ways in which the naked body has been denigrated in the media, A Brief History of Nakedness reveals the ways in which religious teachers, politicians, protesters, and cultural icons have used nudity to enlighten or empower themselves as well as entertain us. Among his many examples, Carr-Gomm discusses how advertisers and the media employ images of bare skin—or even simply the word “naked”—to garner our attention, how mystics have used nudity to get closer to God, and how political protesters have discovered that baring all is one of the most effective ways to gain publicity for their cause. Carr-Gomm investigates how this use of something as natural as nakedness actually gets under our skin and evokes complicated and complex emotional responses.

From the naked sages of India to modern-day witches and Christian nudists, from Lady Godiva to Lady Gaga, A Brief History of Nakedness surveys the touching, sometimes tragic and often bizarre story of our relationships with our naked bodies.

Philip Carr-Gomm is a writer, psychologist, psychotherapist, and the author of many books, including The Druidcraft Tarot and The Druid Planet Oracle.

"I absolutely loved A Brief History of Nakedness. Besides being a fascinating read, it contains the most fun, intriguing, and diverse collection of nude photographs anywhere. A must for anyone interested in art, political activism, and cultural studies. This 'brief' history must have taken forever to research. It makes me want to rip off my clothes for a good cause immediately." --Annie Sprinkle PhD, artist / sexologist

"In this lucid and wide-ranging book Philip Carr-Gomm . . . strips bare the paradoxes of humanity's attitude toward its own naked figures. Using a snappy blend of history and imagery, he invites readers to join him in making thrilling, confusing, funny, and beautiful realizations about that simultaneously mysterious and obvious state of unclothedness. From the rituals of witchcraft to the human art installations of Spencer Tunick to the non-nakedness of the Naked Chef, Carr-Gomm offers the revelation that far from being merely a basic physical state, human nakedness - sacred, obscene - holds the key to understanding politics, culture, and our very nature as human beings."

— Kathleen Rooney, author of Live Nude Girl: My Life as an Object

"A Brief History of Nakedness admirably uncovers religious, political and popular performances of and reactions to nudity in a remarkable array of cultures. Everything from ancient religious devotional practices to recent streaking controversies is discussed in an expert and delightful manner."

"Not only the best book on its subject, but a marvellous read: racy, compassionate, candid and perceptive."

"Philip Carr-Gomm has an idea: Stop reading and start taking off your clothes. He makes that suggestion at the outset of his new book, A Brief History of Nakedness. He aims to underscore the extent to which our stance toward nudity is riddled with contradiction. He has a point."
— Evan R. Goldstein

"As Philip Carr-Gomm reveals in his academic romp through two millenniums of public exhibitionism from the ancient Greeks to animal-rights activists, you can be naked anywhere. You are only nude if someone is watching. Nakedness on its own is straightforward — it’s the context and the audience of nudity that make it interesting."
— Times (UK)

"This fascinating and richly-illustrated book traces the history of humanity's preoccupation with nakedness, revealing the ways in which bare bodies have been used to enlighten, empower or simply entertain us."--Bookseller

"Once you’ve finished this thought-provoking book, go back to the mirror. Slip off the bathrobe and have another look. Unless you were reading it in the waiting room of a plastic surgeon, nothing much will have changed. Yet something seems different. If it weren’t anatomically impossible, you’d swear your whole body was smiling."--Telegraph
— Telegraph (UK)

"Philip Carr-Gomm’s lushly illustrated book takes a long and enthusiastic look at the politics and culture of nakedness. Nudism attracts eccentrics, and their stories, he feels, deserve to be told . . . thought-provoking."–Economist

"A kooky survey of the clothing-free."
— Alexis Soloski

"It’s safe to say that Philip Carr-Gomm is the rare man of letters who would admit to reading Playboy for the centrefolds, rather than the articles. His new book, A Brief History of Nakedness, is exactly what it sounds like, complete with numerous photographs such as the one seen above. But rather than providing flimsy justifications for his ogling, the book instead offers a sustained mediation on the spiritual, cultural and political implications of being naked in public."
— Ryan Bigge

"A Brief History of Nakedness by Philip Carr-Gomm is full of surprising reasons people get naked, and funny ones, and practical ones, and sensual ones, and many more. What might have seemed a topic that was too simple to repay extended thought turns out to have many subtle (and not-so-subtle) facets. . . . This book is as fun as history gets."
— Dispatch (Columbus