A Treasury of Rumi: Guidance on the Path of Wisdom and Unity (Treasury in Islamic Thought and Civilization) (Hardcover) 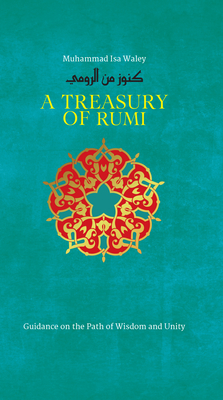 By Muhammad Isa Waley, Jalal Al-Din Rumi
$14.95
On Our Shelves Now. Click on the title to see details.

There are many sides to Jalal al-Din Rumi - scholar, preacher, saint, mystic, love poet, didactic poet, and spiritual master - but the version of him that became 'the best-selling poet in North America' lacks authenticity.

This new anthology of Rumi's teachings is freshly translated and supplemented with commentaries, and also includes selected texts in Persian. The aim is to bring readers closer to his work's true, traditional meaning - and to the man himself as a great Muslim teacher and spiritual guide.

Besides illustrating the traditional basis of Rumi's teachings, this Treasury displays his unique genius as one of the world's greatest religious writers, whose voice speaks as clearly and compellingly today as in the 7th/13th century.

'Everyone has, in their view, become my close friend
but they have not sought out the secrets within me.'
-- Rumi

Dr. Muhammad Isa Waley is an editor, researcher, and translator. He worked for 45 years as curator of Persian and Turkish manuscripts and books, first at the British Museum and then at the British Library. His main research specializations are the verse and prose literature of Islamic spirituality, and Islamic manuscripts. The subject of his Ph.D. thesis was the Divan or lyric poems of Jalal al-Din Rumi. Dr Waley is a regular contributor to the Mawlana Rumi Review
and a member of its Editorial Board. His published translations include Al-Arba'in (Chihil Kalima)
of 'Abd al-Rahman Jami, and Mawlid al-Barzanji: a Paean on the Blessed Prophet's Birth..

Muhammad Isa Waley: Dr. Muhammad Isa Waley is Lead Curator for Persian and Turkish Collections at the British Library, London. His main research specialisations are the palaeography, codicology, illumination and cataloguing of Islamic manuscripts; and the classical verse and prose literature of Islamic spirituality. Among the numerous works edited by Dr. Waley are Islamic Codicology: an Introduction to the Study of Manuscripts in Arabic Script; the English translation of Tafsir al-Jalalayn; several works by Sheikh Muhammad Mutawalli al-Sha'rawi; the Integrated Encyclopedia of Qur'an; and the Kitab al-Adhkar of Imam al-Nawawi.