The Punishment of Gaza (Paperback) 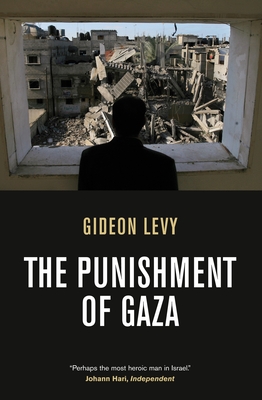 By Gideon Levy
$15.95
On Our Shelves Now. Click on the title to see details.

Israel’s 2009 invasion of Gaza was an act of aggression that killed over a thousand Palestinians and devastated the infrastructure of an already impoverished enclave. The Punishment of Gaza shows how the ground was prepared for the assault and documents its continuing effects.

From 2005—the year of Gaza’s “liberation”—through to 2009, Levy tracks the development of Israel policy, which has abandoned the pretense of diplomacy in favor of raw military power, the ultimate aim of which is to deny Palestinians any chance of forming their own independent state. Punished by Israel and the Quartet of international powers for the democratic election of Hamas, Gaza has been transformed into the world’s largest open-air prison. From Gazan families struggling to cope with the random violence of Israel’s blockade and its “targeted” assassinations, to the machinations of legal experts and the continued connivance of the international community, every aspect of this ongoing tragedy is eloquently recorded and forensically analyzed. Levy’s powerful journalism shows how the brutality at the heart of Israel’s occupation of Palestine has found its most complete expression to date in the collective punishment of Gaza’s residents.

Described by Le Monde as a “thorn in Israel’s flank”, Gideon Levy is a prominent Israeli journalist. For over twenty years he has covered the Israel–Palestine conflict, in particular the occupation of Gaza and the West Bank, for the Israeli newspaper Ha’aretz in his column “Twilight Zone.”

“There are more terrible atrocities in the world than what is being done to the caged prisoners of Gaza, but it is not easy to think of a more cruel and cowardly exhibition of human savagery, fully supported by the US, with Europe trailing politely behind. Gideon Levy’s passionate and revealing account is an eloquent, even desperate, call to bring this shocking tragedy to an end, as can easily be done.”—Noam Chomsky

“Levy has a way with words that leads him to some brilliant indictments of Israel.”—Asa Winstanley, Electronic Intifada

“Levy has made it his exclusive mission ... to document the grim and brutal facts of the occupation, to tell the stories he knows Israelis do not want to hear ... To this shiny nation—democratic, prosperous, confident in its righteousness—Levy holds up Gaza like a mirror.”—Ben Ehrenreich, Nation

“Gideon Levy is among a small group of Israeli journalists giving a face and a voice to Palestinians in the world’s most intractable conflict.”—Irwin Block, Montreal Gazette

“Levy ... deals with the politically and emotionally charged subject of the hardships of Palestinians living in the West Bank and Gaza, and their conflicts with the Israeli military and Jewish settlers.”—Am Johal, Rabble.ca

“The story of Gideon Levy—and the attempt to deride, suppress or deny his words—is the story of Israel distilled. If he loses, Israel itself is lost.”—Johann Hari, Independent

“An Israeli dedicated to saving his country’s honour.”—Nick Lezard, Guardian