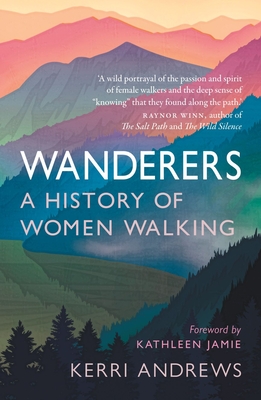 Offering a beguiling view of the history of walking, Wanderers guides us through the different ways of seeing—of being—articulated by ten pathfinding women writers.

“A wild portrayal of the passion and spirit of female walkers and the deep sense of ‘knowing’ that they found along the path.”—Raynor Winn, author of The Salt Path

“I opened this book and instantly found that I was part of a conversation I didn't want to leave. A dazzling, inspirational history.”—Helen Mort, author of No Map Could Show Them

This is a book about ten women over the past three hundred years who have found walking essential to their sense of themselves, as people and as writers. Wanderers traces their footsteps, from eighteenth-century parson’s daughter Elizabeth Carter—who desired nothing more than to be taken for a vagabond in the wilds of southern England—to modern walker-writers such as Nan Shepherd and Cheryl Strayed. For each, walking was integral, whether it was rambling for miles across the Highlands, like Sarah Stoddart Hazlitt, or pacing novels into being, as Virginia Woolf did around Bloomsbury. Offering a beguiling view of the history of walking, Wanderers guides us through the different ways of seeing—of being—articulated by these ten pathfinding women.

Kerri Andrews is a senior lecturer in English literature at Edge Hill University. She has published widely on women’s writing, especially Romantic-era authors, and is a keen hill-walker and member of Mountaineering Scotland.

"The reader of Andrews's Wanderers: A History of Women Walking laces her boots and strikes out with ten women who walked, wrote, and wrote about walking. . . . There are some lovely vignettes. . . . The book is at its best when imaginatively recreating the sole-tiring, soul-stirring, stomping simplicity of walking alone. Then the reader shares the rapture of Virginia Woolf's cry: 'Oh the joy of walking!'"
— Laura Freeman

"Historically, women were consigned to domestic tasks that hemmed them in. For a woman to walk as freely as a man was a radical act and fraught with potential danger. Here Andrews turns a scholarly eye on ten women throughout history, most of whom lived in Great Britain, who walked or, rather, hiked long distances. . . . Andrews interacts with each walker by either tracing similar paths herself or reflecting upon those paths' significance."
— Booklist

"Through the life stories of ten wandering women, Andrews explores 'the previously unacknowledged breadth, depth, and distinctiveness' of their writing, and reveals a rich 'female tradition of walking.' . . . For Linda Cracknell, who lives in the Tayside town of Aberfeldy, both writing and walking are empathetic activities. The paths she walks 'ring with the voices of earlier women-walkers who passed there.' After writing this book, Andrews too finds her paths 'companioned' (to use Nan Shepherd’s word) by other women-wanderers, part of a rich cultural heritage that her fascinating research has revealed."
— Guardian

"In her book Wanderers: A History of Women Walking, Borders-based writer and hillwalker Kerri Andrews profiles women writers for whom walking solo has been an empowering act, pivotal to their creativity and personal freedom. 'The history and literature of walking is all about men, so there’s the sense that it is therefore a male space because women have no role models or history,' said Kerri. 'But there is a long history of women walking. It held great importance for them but they wrote in journals and letters, so their accounts were not as well-known."
— Sunday Post

"The history of walking has always been women's history, Andrews declares, even if the weight of manmade literature suggests otherwise."
— Sunday Telegraph

"Literary scholar (and walker) Andrews offers a deft introduction to ten women walker/writers. Her overall point is that women's walking has been overlooked by those (men) who have considered walking a modern cultural activity. . . . Recommended."
— Choice

"Andrews features a wonderful cast of characters. . . . It still feels somehow radical to talk about women ramblers and flâneuses; the sensitive, well-researched portraits in Wanderers rightly begin to redress the balance."
— The Idler

"This book not only brings to light some women who walked and have been hidden in the shadows, but inspires us to consider our own reasons for walking and what we get from it. Andrews brings her own experiences and connections with the women she introduces in the book into each chapter, and her own love of walking shines through. . . . If I hadn't read this book already, it would be on my wish list this Christmas!"
— Scottish Mountaineer

"In Wanderers, the reader finds him or herself in excellent company. We accompany literary legends such as Virginia Woolf and Dorothy Wordsworth as well as less well known, but equally exceptional, figures such as Ellen Weeton and Sarah Stoddard Hazlitt as they stride out through the landscapes that inspired and sustained them. . . . Although Wanderers does show its readers that there have, historically, been barriers to women’s freedom to walk, its great achievement is to remind us of the prize worth challenging convention and facing those risks, that the freedom to walk is."
— The Pilgrim

“In giving voice to female walker-writers, Wanderers fills out some big blanks in the history of walking, from an eighteenth-century pioneer to walkers of the present day. . . . In Andrews's sensitive portrayals there's a sense of identification with her subjects. This may be as close as you'll get to the inside of Nan Shepherd's head—and that seems like an interesting place to be.”
— UKHillwalking.com, "Top Picks of 2020"

"Think of famous walkers and it's men like Wordsworth and Keats who likely spring to mind. But that's only half the story: here Andrews fills in the blanks with a history of women walkers of the last three hundred years, including eighteenth-century roamer Elizabeth Carter, Anaïs Nin, Nan Shepherd, and Cheryl Strayed."
— Country Walking Magazine

"Andrews's academic background is balanced by her sociable writing style which gives it a broad appeal. This is a truly pioneering book from an author whose love of her subject shines through. Whether you read it from the comfort of your armchair or take it with you on your next walking adventure, it is the kind of book that will stay with you for many years to come."
— Yorkshire Gazette and Herald

"What unites these accounts of plucky women is that they use walking and wandering to break gender barriers and to acquire a measure of freedom and independence."
— Perceptive Travel

"The written works of these women walker-authors offer new insights into the role of walking in human creativity. They also demonstrate that while women at times walked for the same purposes as men, the experience of being on foot has often meant markedly different things for them. As Andrews makes clear, the burdens placed on women throughout the centuries have never stopped them from walking."
— Geographical

"[Andrews's] study successfully fills in several of the blanks that have characterized and marginalized the Western history of female walking until today. As such, Andrews’s pioneering book is a must-read for any scholars working on the interplays of gender and mobility."
— Transfers: Interdisciplinary Journal of Mobility Studies

"A wild portrayal of the passion and spirit of female walkers and the deep sense of 'knowing' that they found along the path."
— Raynor Winn, author of the "The Salt Path"

"For centuries, women have walked for freedom, pleasure, identity, and solace: they have walked-for-their-lives. Andrews’s remarkable history of these wanderers is timely and exciting. Enchanted by Andrews’s accessible, engaging, rigorous work, I opened this book and instantly found that I was part of a conversation I didn’t want to leave. A dazzling, inspirational history."
— Helen Mort, author of "Black Car Burning," "Division Street," and "No Map Could Show Them"

“Walking is a seemingly straightforward, near-universal activity. But Andrews’s revelatory and important book shows us how walking has, for women, come to hold such political significance that walks—Reclaim the Streets marches—are a mainstay of feminist protest. With the absorbing voice and attention to detail of a favorite hiking companion, Andrews unearths the forgotten women who have walked for creativity, for independence and self-discovery, to remember, to forget, to escape violence, to find physical and emotional strength. It’s easy to think of hiking as a solitary pursuit, but Andrews expertly reveals how walking and walkers are profoundly shaped by social dynamics. The remarkable women in Wanderers walk in the face of restrictive corsets and crinolines, the demands of motherhood, nay-saying medical advice, and an ever-present fear of male violence. When we picture a walker, it is usually a man, alone on a mountain summit. But Andrews opens up a very different and vastly more expansive vista, in which ‘the history of walking has always been women’s history,’ and every present-day walker, male and female, should be grateful to her.”
— Rachel Hewitt, historian and trail-runner, author of "Map of a Nation"

“Wanderers discovers a history of women walkers which spans three hundred years. . . . [Andrews’s] company is just as intelligent and lively as the women she ‘companions’ along the way. Heaven knows how many miles are covered—an astonishing number. But miles don’t really matter. What matters is that all women who can, should feel encouraged to get out there and claim our birthright. We should all be able to enjoy our walking free from fear, in what is, after all, our world too. Thanks to this book, we know that even in solitude we never walk alone. A fine female tradition is at our backs, encouraging us along.”
— Kathleen Jamie, author of "Surfacing," "Sightlines," and "Findings"