Fighting Proud: The Untold Story of the Gay Men Who Served in Two World Wars (Hardcover) 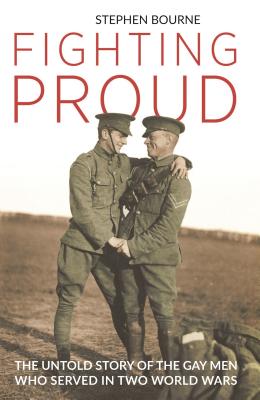 In this astonishing new history of wartime Britain, historian Stephen Bourne unearths the fascinating stories of the gay men who served in the armed forces and at home, and brings to light the great unheralded contribution they made to the war effort. Fighting Proud weaves together the remarkable lives of these men, from RAF hero Ian Gleed - a Flying Ace twice honoured for bravery by King George VI - to the infantry officers serving in the trenches on the Western Front in WWI - many of whom led the charges into machine-gun fire only to find themselves court-martialled after the war for indecent behaviour. Behind the lines, Alan Turing's work on breaking the 'enigma machine' and subsequent persecution contrasts with the many stories of love and courage in Blitzed-out London, with new wartime diaries and letters unearthed for the first time. Bourne tells the bitterly sad story of Ivor Novello, who wrote the WWI anthem 'Keep the Home Fires Burning', and the crucial work of Noel Coward - who was hated by Hitler for his work entertaining the troops. Fighting Proud also includes a wealth of long-suppressed wartime photography subsequently ignored by mainstream historians.
This book is a monument to the bravery, sacrifice and honour shown by a persecuted minority, who contributed during Britain's hour of need.

Stephen Bourne is a writer and historian. An expert on Black and LGBT British history, he has written for BBC History Magazine and History Today and is a regular contributor to the Oxford Dictionary of National Biography. His most recent Amazon-bestselling book Black Poppies (History Press, 2014), a history of the contribution of black men and women to the First World War, won the Southwark Arts Forum Award for Literature. He has also written widely on homosexual representations in film.