The Man-Eaters of Tsavo: and Other East African Adventures (Hardcover) 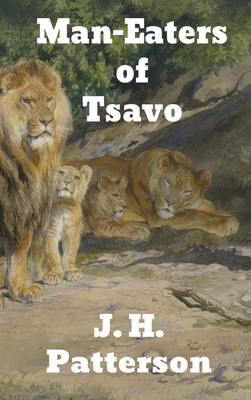 The Man-eaters of Tsavo is a book written by John Henry Patterson in 1907 that recounts his experiences while overseeing the construction of a railroad bridge in what would become Kenya. It is titled after a pair of lions which killed his workers, and which he eventually killed. Following the death of the lions, the book tells of the bridge's completion in spite of additional challenges (such as a fierce flood) as well as many stories concerning local wildlife (including other lions), local tribes, the discovery of the maneaters' cave, and various hunting expeditions. An appendix contains advice to sportsmen visiting British East Africa.

Several publications about and studies of the man-eating lions of Tsavo have been inspired by Patterson's account. The book has been adapted to film three times: a monochrome, British film of the 1950s, a 1952 3-D film titled Bwana Devil, and a 1996 color version called The Ghost and the Darkness, where Val Kilmer played the daring engineer who hunts down the lions of Tsavo. Colonel John Patterson is to build a bridge in East Africa (later Kenya). While he is working on this, two man-eating lions show up. They will stop at nothing for a bite of human flesh and the first attempts to stalk, capture or keep them out of the camp fail. They attack the camp hospital and kill a patient. Even after the hospital is moved, one lion penetrates the thick, thorn fence called a boma built to protect it and drags the water carrier away to his death. In the course of hunting these lions, Patterson encounters a red spitting cobra, a rhinoceros, a hippopotamus, a pack of wild dogs, a wildebeest that faked dying, and a herd of zebra, of which he captured six. He also shoots a new type of antelope, T. oryx pattersonianus. Eventually, the first lion is defeated by baiting it with a tethered donkey while Patterson keeps watch from an elevated stand - though for a few tense moments Patterson himself becomes the hunted. Patterson and Mahina hunt the second lion on the plains. When they find and shoot it, the lion charges them and it takes repeated shots to bring it down. The lions are not the only challenge to completing the bridge project. Tensions between native workers and Sikhs brought in from British East India to work on the project (coolies) threaten to stop the project. At one point, Patterson meets a danger far greater than the lions - a fierce flood. It wipes out the supply bridges and wraps iron girders around tree trunks like wire. Uprooted tree trunks act like battering rams trying to annihilate the bridge. But the well-built bridge stays intact. This challenge proves that the year spent working on the bridge has not been wasted. After Patterson completes the bridge, he learns that a lion has been trying to destroy the train station. When he goes to see, he finds big bloodstains where the lion was trying to slash the roof.