Nights of Iron and Ink (Hardcover) 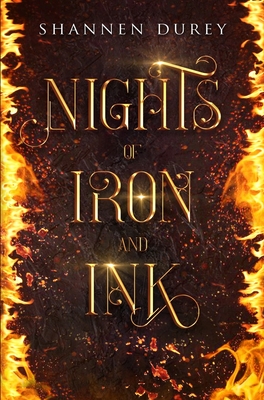 Vera has made a living breaking the law, but even she follows one rule-never steal from the Fae.

Eighteen-year-old Vera, a half human, half fae, has spent the last five years trying and failing to earn a place with the Rogues, but with her burgeoning powers and monstrous appearance, she fits in better with the flesh-eating beasts plaguing her world than she does the fierce halfling warriors fighting them.

When a powerful object is uncovered, Vera finally has her opportunity to become a Rogue. All she has to do is steal the object before it reaches the Faylands, which is easier said than done. She quickly discovers she is not the only one after it when the object is stolen right out from under her, and she's left as the only one to blame when the Fae arrive. Stealing from them is a death sentence, but the frightening Fae Lord Vera encounters offers her a bargain instead-her life in exchange for what was stolen.

As Vera searches for the missing object, her tenuous control over her dark powers is pushed past its limits, and she learns the pain of ultimate betrayal. Her only hope of making it out alive is the Fae Lord at her side, but Vera would rather serve herself up as dinner to a flesh-eating beast than ever make a truce with a Fae.