Revenge: How Donald Trump Weaponized the US Department of Justice Against His Critics (Hardcover) 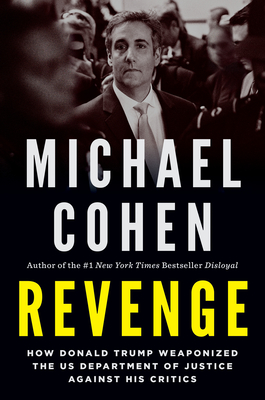 The man the New York State Attorney General credited with inspiring her prosecution of Donald Trump — New York Times number one bestselling author Michael Cohen — tells the behind-the-scenes story of what can happen to you — and what really happened to him — when a President who believes himself to be above the law decides to go after his critics . . . .

Meanwhile, with the release of the Steele Dossier, Cohen also found himself battling endless news reports citing the Dossier's claims that he'd had clandestine dealings with Russia — reports that only mounted despite his exoneration by the Mueller Report.

In a story now being echoed in recent breaking news stories about IRS persecution of Trump foes such as former FBI head James Comey and others, Cohen details — in his inimitable blunt language, with absolutely no holds barred and naming names — his attempt to clear his name and tell the truth about Donald Trump. Chillingly, he also makes clear what happens when you try to speak truth to power, and the power knows no bounds.

Michael Cohen is the principal of Crisis-X, a crisis management company. He acted as personal attorney to the former President of the United States, Donald. J. Trump, and before that was Executive Vice President for the Trump Organization and Special Counsel to Donald J. Trump. Since his release from the Otisville Federal Correctional Institution, he has authored the New York Times number one bestselling book, Disloyal: A Memoir. He also hosts the top-rated news podcast, Mea Culpa With Michael Cohen, and has become a political commentator regularly seen on major news outlets. He lives in New York City with his wife and two children.

Praise for Michael Cohen and Revenge: How Donald Trump Weaponized the US Department of Justice Against His Critics . . .

"Michael Cohen has a strong voice in standing up to power and speaking for fairness and justice in the American political and judicial systems. He has seen it all from many angles, and the bumps and bruises have shaped his refreshing, truthful voice." —Congressman Steve Cohen (D-TN)

"Michael Cohen made his amends, and he paid a severe price for it. But that was not good enough for "Individual #1," Donald Trump. He and his DOJ cronies embarked on an ugly campaign of revenge, which Cohen details in this must-read volume." — Norm Eisen, former U.S. ambassador, and co-counsel for the House Judiciary Committee during the first impeachment and trial of President Donald Trump

"Michael Cohen illustrates that it is never too late to become a truth-teller. He is a parrhessiastes int he true Greek sense of the word — willing to speak truth to power, despite the risk of retaliation by those who would like to see him silenced." —Asha Rangappa, Senior Lecturer at the Yale University’s Jackson Institute for Global Affairs

"Michael Cohen knows Donald Trump’s twisted mind and insatiable lust for dominance better than anyone else. When Cohen writes about Trump we should pay close attention." — David Cay Johnston, author of the New York Times bestseller, The Making of Donald Trump

"Michael Cohen's Revenge is like Michael himself: no b.s., right to the point, and driven by relentless energy to tell America the hard truths about why it's so vital to hold Donald Trump accountable for his crimes in and out of the White House." — Rick Wilson, author of the New York Times bestseller Everything Trump Touches Dies

“Nobody in America exists at the intersection of Donald Trump and the justice system like Michael Cohen does. Cohen’s experience as Donald Trump’s lawyer, as a defendant in a case tied to Trump’s disregard for the law and, ultimately, as a felon, is uniquely relevant where both justice and democracy in America are in peril.” — Ali Velshi, MSNBC anchor and host of "Velshi"

"There's so much more to Michael Cohen's story than many people realize. This time around, Cohen is on a mission. He takes you along for the ride in his uniquely unvarnished style, as he seeks justice and redemption." — Tara Setmayer, former CNN and ABC News political commentator, and former GOP Communications Director on Capitol Hill

"Michael Cohen exposed Trump's crimes. He testified about them to Congress. He brought receipts, revealing to the American people the campaign finance crimes he committed with, for the benefit of, and at the direction of "Individual #1" — Donald Trump. And Michael paid the price. Yet NO accountability for Trump? This is not how America is supposed to work." —Glenn Kirschner, former Federal prosecutor, and an NBC News/MSNBC legal analyst

"I could never understand how Michael Cohen was the only one held accountable for the crimes directed by Trump." — General Mark Hertling, former Commanding General of US Army Europe and Seventh Army

"Many people think that they can 'speak truth to power,' but no one does it quite like Michael Cohen. Despite being prosecuted and persecuted, Michael fought back and his latest book exposes in vivid detail how Donald Trump tried to weaponize the biggest law firm in the world, the Department of Justice, to cater to his whims." — Katie Phang, host of MSNBC's "Katie Phang Show"

"Michael Cohen is on a mission to hold Team Trump accountable and his book is part of that journey. I highly recommend it. It will inspire you to fight for what's right!" —Maz Jobrani, Iranian-American comedian and actor who was part of the "Axis of Evil" comedy group

“Michael Cohen did what far too many around Trump were afraid to do: he stepped forward and shined a light. His words — and his example — should be a lesson to others that it’s never too late to speak up. Indeed, our democracy depends on it.” — Miles Taylor, author (as "Anonymous") of the New York Times bestseller A Warning From a Senior Trump Administration Official

"Michael Cohen has become the brutal truth-teller we desperately need at a crucial moment of deceit, lies and conspiracy theories by a former president driven by Revenge. Michael’s story should stand as chilling testimony and as a stark warning of what a vengeful Trump is capable of if he were ever allowed near the Oval Office again." — Maria Cardona, Democratic strategist and CNN/CNN en Español political commentator