The Dark Eclipse: Reflections on Suicide and Absence (Hardcover) 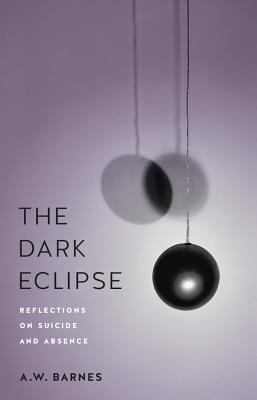 The Dark Eclipse is a book of personal essays in which author A.W. Barnes seeks to come to terms with the suicide of his older brother, Mike. Using source documentation—police report, autopsy, suicide note, and death certificate—the essays explore Barnes’ relationship with Mike and their status as gay brothers raised in a large conservative family in the Midwest. In addition, the narrative traces the brothers’ difficult relationship with their father, a man who once studied to be a Trappist monk before marrying and fathering eight children. Because of their shared sexual orientation, Andrew hoped he and Mike would be close, but their relationship was as fraught as the author’s relationship with his other brothers and father. While the rest of the family seems to have forgotten about Mike, who died in 1993, Barnes has not been able to let him go. This book is his attempt to do so.

A.W. Barnes has a Ph.D. in English Literature and an MFA in Creative Writing. His nonfiction has appeared in Broad Street, The Away Journal, Gertrude Press, and Sheepshead Review. His academic book Post-Closet Masculinities in Early Modern England was published by Bucknell University Press in 2009. He lives in New York City.

Barnes brilliantly understands the memoirist’s spiritual prerogative—we are able to bring the dead back to life in our prose. We can take the pictures off the wall and make them dance; we can take the facts of dry documents and make them into vivid stories. The Dark Eclipse is a beautiful example of this.
— Susan Cheever

"Powerful, often devastating, and proof if proof were needed that personal essays can be immensely intelligent and profoundly moving."
— Peter Trachtenberg

"Hard-won knowledge is the kind that matters most. In The Dark Eclipse, Andrew Barnes tracks the reverberations of his brother’s suicide through the long decades of aftermath. This is honest work—the bubble in the spirit-level rides at dead center."
— Sven Birkerts

"The story Barnes weaves in this memoir—a story of suicidal desires and success, of what drives siblings apart and could, at turns, bring them back together—is a lyric noir of family instability, personal revelation, and queer inheritance both genealogical and literary....Our job, as Barnes beautifully demonstrates here, is to take the ashes of our lives—not only our lived lives, but our lives as readers, too—and sculpt them into a new art."
— Lambda Literary

"Barnes' unencumbered language make this shortish book a breezy read. The subject matter, however--the exploration of death, family history, and the discovery of self--are not so easy; bu they are necessary."
— Gay & Lesbian Review