The Bears of Brooks Falls: Wildlife and Survival on Alaska's Brooks River (Paperback) 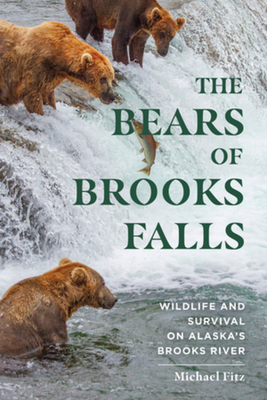 A natural history and celebration of the famous bears and salmon of Brooks River.

On the Alaska Peninsula, where exceptional landscapes are commonplace, a small river attracts attention far beyond its scale. Each year, from summer to early fall, brown bears and salmon gather at Brooks River to create one of North America’s greatest wildlife spectacles. As the salmon leap from the cascade, dozens of bears are there to catch them (with as many as forty-three bears sighted in a single day), and thousands of people come to watch in person or on the National Park Service’s popular Brooks Falls Bearcam.


The Bears of Brooks Falls tells the story of this region and the bears that made it famous in three parts. The first forms an ecological history of the region, from its dormancy 30,000 years ago to the volcanic events that transformed it into the Valley of Ten Thousand Smokes. The central and longest section is a deep dive into the lives of the wildlife along the Brooks River, especially the bears and salmon. Readers will learn about the bears’ winter hibernation, mating season, hunting rituals, migration patterns, and their relationship with Alaska’s changing environment. Finally, the book explores the human impact, both positive and negative, on this special region and its wild population.

Michael Fitz, a former National Park Service ranger, has distinguished himself as an expert in the natural history and ecology of Brooks River, particularly the river's brown bears. He continues to share his love of national parks and nature everywhere on his blog, fitznaturalist.com, and through his work as a Fellow for explore.org. He lives in northern Maine.