Rise of the Red Hand (The Mechanists #1) (Hardcover) 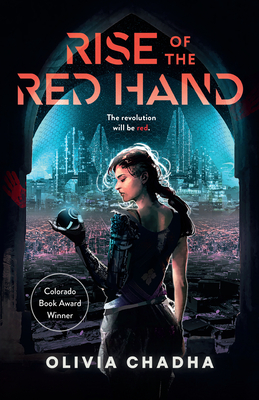 A rare, searing portrayal of the future of climate change in South Asia. A streetrat turned revolutionary and the disillusioned hacker son of a politician try to take down a ruthlessly technocratic government that sacrifices its poorest citizens to build its utopia.

The South Asian Province is split in two. Uplanders lead luxurious lives inside a climate-controlled biodome, dependent on technology and gene therapy to keep them healthy and youthful forever. Outside, the poor and forgotten scrape by with discarded black-market robotics, a society of poverty-stricken cyborgs struggling to survive in slums threatened by rising sea levels, unbreathable air, and deadly superbugs.

Ashiva works for the Red Hand, an underground network of revolutionaries fighting the government, which is run by a merciless computer algorithm that dictates every citizen’s fate. She’s a smuggler with the best robotic arm and cybernetic enhancements the slums can offer, and her cargo includes the most vulnerable of the city’s abandoned children.

When Ashiva crosses paths with the brilliant hacker Riz-Ali, a privileged Uplander who finds himself embroiled in the Red Hand’s dangerous activities, they uncover a horrifying conspiracy that the government will do anything to bury. From armed guardians kidnapping children to massive robots flattening the slums, to a pandemic that threatens to sweep through the city like wildfire, Ashiva and Riz-Ali will have to put aside their differences in order to fight the system and save the communities they love from destruction.

Olivia Kaur Chadha began her writing career with a stint in Los Angeles writing comic book scripts for Fathom. She has a Ph.D in creative writing from Binghamton University and a master's in creative writing from the University of Colorado, Boulder. Her research centers on exile, folklore and fairy tales, and the environment. She is first-generation American of Punjabi Sikh and Latvian/German descent and lives in Colorado with her family and two very odd dogs.

"Chadha’s prose is equally gorgeous and precise, and always full of energy and movement." -- John Vernon

"Her talent is evident on every page." -- Greg Ames