Queens of Jerusalem: The Women Who Dared to Rule (Hardcover) 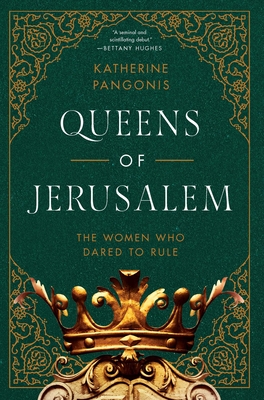 The untold story of a trailblazing dynasty of royal women who ruled the Middle East  and how they persevered through instability and seize greater power.

In 1187 Saladin's armies besieged the holy city of Jerusalem. He had previously annihilated Jerusalem's army at the battle of Hattin, and behind the city's high walls a last-ditch defence was being led by an unlikely trio - including Sibylla, Queen of Jerusalem. They could not resist Saladin, but, if they were lucky, they could negotiate terms that would save the lives of the city's inhabitants.

Queen Sibylla was the last of a line of formidable female rulers in the Crusader States of Outremer. Yet for all the many books written about the Crusades, one aspect is conspicuously absent: the stories of women. Queens and princesses tend to be presented as passive transmitters of land and royal blood. In reality, women ruled, conducted diplomatic negotiations, made military decisions, forged alliances, rebelled, and undertook architectural projects. Sibylla's grandmother Queen Melisende was the first queen to seize real political agency in Jerusalem and rule in her own right. She outmanoeuvred both her husband and son to seize real power in her kingdom, and was a force to be reckoned with in the politics of the medieval Middle East. The lives of her Armenian mother, her three sisters, and their daughters and granddaughters were no less intriguing.

Queens of Jerusalem is a stunning debut by a rising historian and a rich revisionist history of Medieval Palestine.

Katherine Pangonis is a historian specialising in the medieval world of the Mediterranean and Middle East. She holds MA degrees in literature and history from Oxford University and University College London. She has a particular interest in rewriting the voices of women into the historical narrative, re-examining understudied areas of history and bringing her findings into the public eye.

"A complex historical narrative that celebrates female agency and a tale of family intrigue spanning generations, this book sheds light on the silenced women of a fascinating medieval bloodline."
— Kirkus Reviews

“Using a good range of contemporary sources, Pangonis deftly weaves together the life stories of the dynasty of women who ruled the Latin East in the twelfth century. Perhaps the greatest strength of this work is that Pangonis situates these women in the landscape, architecture, and culture of the Near East, combining physical descriptions with a colourful and engaging narrative.”
— The Times Literary Supplement (London)

"Fascinating, intriguing, exciting and authoritative. Here are the female rulers of the crusader states as shrewd politicians, warrior queens and mothers and wives, holding their own against male crusader states and Islamic warlords in the ruthless arena of the Middle East. The female crusader potentates have long been neglected, so this is long overdue and it was worth waiting for."
— Simon Sebag Montefiore, New York Times bestselling author of Jerusalem

"The subjects of this important and inspiring book have regularly been resigned to the footnotes of history. But the Queens of Jerusalem are history-makers, game-changers. Delight in their company in this seminal and scintillating debut."
— Bettany Hughes

"In a refreshing shift of historical emphasis, these women, whether players or pawns, are brought to life on their own terms, their experiences and careers."
— Christopher Tyerman, Professor of History of the Crusades at Oxford University

"A simply fascinating, original, and detailed history that is especially and unreservedly recommended for personal, professional, community, college, and university library Crusader History & Medieval Palestine collections, "Queens of Jerusalem: The Women Who Dared to Rule" by Katherine Pangonis is a model of historical research. Exceptionally well written, organized and presented."
— Midwest Book Review