Arbitrary Lines: How Zoning Broke the American City and How to Fix It (Paperback) 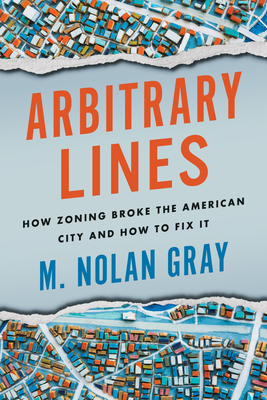 What if scrapping one flawed policy could bring US cities closer to addressing debilitating housing shortages, stunted growth and innovation, persistent racial and economic segregation, and car-dependent development?

It’s time for America to move beyond zoning, argues city planner M. Nolan Gray in Arbitrary Lines: How Zoning Broke the American City and How to Fix It. With lively explanations and stories, Gray shows why zoning abolition is a necessary—if not sufficient—condition for building more affordable, vibrant, equitable, and sustainable cities.

The arbitrary lines of zoning maps across the country have come to dictate where Americans may live and work, forcing cities into a pattern of growth that is segregated and sprawling.

The good news is that it doesn’t have to be this way. Reform is in the air, with cities and states across the country critically reevaluating zoning. In cities as diverse as Minneapolis, Fayetteville, and Hartford, the key pillars of zoning are under fire, with apartment bans being scrapped, minimum lot sizes dropping, and off-street parking requirements disappearing altogether. Some American cities—including Houston, America’s fourth-largest city—already make land-use planning work without zoning.

In Arbitrary Lines, Gray lays the groundwork for this ambitious cause by clearing up common confusions and myths about how American cities regulate growth and examining the major contemporary critiques of zoning. Gray sets out some of the efforts currently underway to reform zoning and charts how land-use regulation might work in the post-zoning American city.

Despite mounting interest, no single book has pulled these threads together for a popular audience. In Arbitrary Lines, Gray fills this gap by showing how zoning has failed to address even our most basic concerns about urban growth over the past century, and how we can think about a new way of planning a more affordable, prosperous, equitable, and sustainable American city.

M. Nolan Gray is a professional city planner and an expert in urban land-use regulation. He is currently completing a Ph.D. in urban planning at the University of California, Los Angeles. Gray previously worked on the front lines of zoning as a planner in New York City. He now serves as an Affiliated Scholar with the Mercatus Center at George Mason University, where he advises state and local policymakers on land-use policy. Gray is a contributor to Market Urbanism and a widely published author, with work appearing in outlets such as The Atlantic, Bloomberg Citylab, and The Guardian. He lives in Los Angeles, California and is originally from Lexington, Kentucky.

"A welcome manifesto for rethought urban spaces and their outliers, bringing social justice into the discussion."
— Kirkus Reviews

"Arbitrary Lines is at once a primer and a manifesto, a highly readable introduction to zoning’s history and harms as well as a bracing call for a post-zoning city."
— American Conservative

"A provocation and a prescriptive treatise."
— Common Edge

“Overall, Gray’s book is an excellent addition to the literature on housing and land-use regulations.”
— Adam Millsap

"The major purpose of Nolan Gray's new book, Arbitrary Lines, is to show that by limiting housing construction, zoning increases rents by limiting housing supply, accelerates suburban sprawl by reducing density and pricing Americans out of walkable areas, and slows economic growth by making it expensive for Americans to move to prosperous areas. On each count, Gray makes a persuasive (to me) case."
— Planetizen

“If you are interested in affordable housing, housing equity,  environmental justice, reduction of carbon emissions, adequate public transit, or streets that are safe for walking and cycling, Arbitrary Lines is an excellent resource in understanding how American cities got the way they are and how they might be changed for the better.”

"Nolan Gray has the insights of Jane Jacobs and the prose style of Mark Twain. In his aptly-titled new book, Arbitrary Lines, Gray argues that zoning in America is a disease masquerading as a cure. He also proposes a post-zoning style of planning for fair, sustainable, and livable cities."
— Donald Shoup, Distinguished Research Professor, Department of Urban Planning, University of California, Los Angeles; author of "The High Cost of Free Parking"

“In Arbitrary Lines, Nolan Gray wrote a compelling argument for urgently reforming the ‘stodgy rulebook’ that distorts the shape and decreases the welfare of American cities. In addition to his devastating critique of the status quo, Nolan suggests a practical path that would allow urban communities to get out of their current zoning straightjacket. This book is a must-read for all of us who are interested in more innovative and affordable cities.”
— Alain Bertaud, senior fellow at the Marron Institute of Urban Management and former principal urban planner at the World Bank

"In Arbitrary Lines, Gray provides a compelling case against the parochial zoning rules that have shaped Americans' lives, from our homes to our budgets to the work opportunities available to us. While the costs of zoning become clearer each year, few have questioned the paradigm of local policymakers determining the quantity and type of building that will be permitted on the private land in their jurisdictions. Gray steps in with a new way of thinking about urban land use and a road map for a future unconstrained by zoning."
— Emily Hamilton, Senior Research Fellow and Director of the Urbanity Project at the Mercatus Center at George Mason University