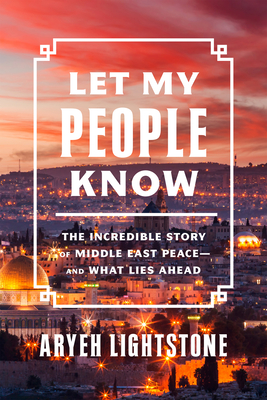 The Trump Administration's "Peace to Prosperity" vision for the Middle East was unveiled on January 28, 2020. What followed over the next eleven months, concluding with the signing of the Israel-Morocco normalization agreement was one of the most fascinating and consequential periods of U.S. foreign policy in a generation, leading to five normalization agreements between Israel and Muslim states. The Abraham Accords achieved what had seemed impossible for decades and set the Middle East on a trajectory toward a broad regional peace.

Aryeh Lightstone is uniquely positioned to tell the story. As the senior advisor to the U.S. Ambassador to Israel, he was in the room for nearly every major discussion and decision involving Middle East policy. He was tasked with the most complex and sensitive component of the Abraham Accords: turning them into practical action and doing it quickly-during a pandemic, no less. In addition, he led the Abraham Accords Business Summit and the Abraham Fund, and served as the key contact between Israel and the other Accords nations.

Let My People Know provides a behind-the-scenes account of the strategies that allowed the "Deal of the Century" to be struck, and an unvarnished look at the region's idiosyncrasies that factored into the process. A rabbi and an enthralling storyteller, Lightstone paints a vivid picture of the varied cultures and personalities involved. He also offers a glimpse into the day-to-day activities of an embassy.

Finally, he explains what the Biden administration must do better to advance America's interests abroad. We now have a paradigm for a forward-looking Middle East policy that ultimately benefits the United States. Lightstone makes the case for strategic action to maintain the momentum.