The Neglected C.S. Lewis: Exploring the Riches of His Most Overlooked Books (Paperback) 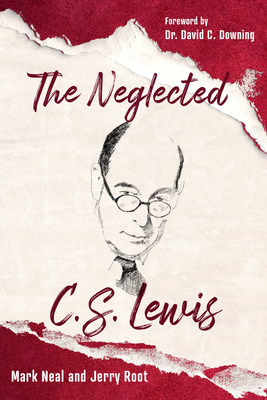 Readers who can quote word for word from C.S. Lewis’s theological classic, Mere Christianity, or his science fiction novel, Perelandra, have often never read his work as a professional literary historian. They may not even recognize some of the neglected works discussed, here. Mark Neal and Jerry Root have done students of Lewis a great service, tracing the signature ideas in Lewis’s works of literary criticism and showing their relevance to Lewis’s more familiar books. Their thorough research and lucid prose will be welcome to all who would like to understand Lewis more fully, but who feel daunted by books of such evident scholarly erudition.

For example, when you read The Discarded Image on the ancients’ view of the heavens, you understand better why Ransom has such unpleasant sensations when first descending toward Malacandra in Out of the Silent Planet. And when you come across Lewis’s discussion in OHEL  of a minor sixteenth-century poet who described the hellish River Styx as a “puddle glum,” you can’t help but chuckle at the name when you meet the famous Marshwiggle in The Silver Chair. These are just two examples of how reading the “Neglected Lewis” can help every reader understand Lewis more fully.

Mark Neal is the co-author of both The Neglected C.S. Lewis and The Surprising Imagination of C.S. Lewis. He has lectured, taught and published nationally and internationally on Lewis for the last ten years. He works as the VP of a Chicago-area marketing firm and is married with two children.

DR. JERRY ROOT is an Associate Professor at Wheaton College where he teaches graduate courses in the MA in Evangelism Program as well as courses in the undergraduate Christian Formation and Ministry Department. In addition, Jerry is a visiting professor at Biola University and Talbot Graduate School of Theology in La Mirada, California.Jerry has written many books centered around the teachings of C.S. Lewis. He has lectured on C. S. Lewis at 48 College or University Campuses in 11 countries. He has taught college and graduate courses on C. S. Lewis for 30 consecutive years.Jerry and his wife Claudia have four married children, four grandchildren, and a Welsh Corgi; they live in Wheaton, Illinois.

“In 1952 Lewis disclosed that writing his magnum opus on the literature of the sixteenth century had been his ‘top tune’ for fifteen years and all the other books he wrote during that period were ‘only its little twiddly bits.’ It may surprise some readers to hear Lewis describe The Lion, the Witch and the Wardrobe, The Screwtape Letters and The Abolition of Man—to mention just three—as mere twiddly bits in comparison with the main melody of his output. But that was how he saw it. Neal and Root are to be commended for rehabilitating that ‘top tune’ and other similarly neglected works in this clear, useful, and informative survey.” -Michael Ward, University of Oxford, co-editor of The Cambridge Companion to C.S. Lewis

“Neal and Root have done us a great service. At a time when we are in danger of being surfeited by the endless rehashing of the well-known C.S. Lewis, they have opened up the treasures of the less known but invaluable Lewis. I found this book delightful and stimulating.” -Os Guinness, author of Carpe Diem Redeemed

“Reading The Neglected C.S. Lewis reminded me, a professor at a very secular Russian university, of what Lewis said about Charles Williams’ lecture on Milton’s Comus: ‘I have at last, if only for once, seen a university doing what it was founded to do: teaching wisdom.’” -Olga B. Lukmanova, Nizhny Novgorod State Linguistics University, Russia

“I remember my surprise and delight when I discovered, as a literature student, that the author whose Narnia stories I had enjoyed as a child was also a brilliant literary critic, in fact the most lucid and helpful of all the scholars whose works I read at Cambridge. I am delighted, therefore, to see that Neal and Root are sharing so much of this treasure in this new volume. They are ideal guides. I heartily recommend this volume.” -Malcolm Guite, author, poet, and Chaplain at Girton College, Cambridge

“Neal and Root do not want C.S. Lewis’ neglected works to remain neglected. The reasons they spell out in this book are compelling, as is the authoritative guidance they provide for those works. Beyond Screwtape, Narnia, Mere Christianity, and the space trilogy, there turns out to be a vast terrain of underappreciated insight (from Lewis and these authors both).” -Mark Noll, author of Turning Points: Decisive Moments in the History of Christianity

“Lewis’s most popular books are rich in wisdom and wonder, but many of his most important insights are buried in the pages of his lesser-known works. Now, at last, Mark Neal and Jerry Root have provided us with a map that leads us straight to the heart of these treasures.” -Diana Pavlac Glyer, Professor in The Honors College at Azusa Pacific University and author of The Company They Keep: C.S. Lewis and J. R. R. Tolkien as Writers in Community

“Neal and Root are reliable guides to the professional writings of C. S. Lewis, demonstrating how his insights on past literature help us navigate the turbulent waters of today’s words and rhetoric.” -Bruce R. Johnson, General Editor, Sehnsucht: The C.S. Lewis Journal

“C.S. Lewis has two sets of readers who almost never talk to each other. Finally, Neal and Root have arisen to help introduce them to each other. It’s about time!” -Donald T. Williams, R. A. Forrest Scholar & Professor of English, Toccoa Falls College

“Even though the subject matter may seem obscure and academic, I believe that you will find your horizons broadened. The best outcome for this book will be an impetus to go back and read Lewis’s ‘neglected’ books and the works that inspired them.” -Art Lindsley, Vice-President of Theological Initiatives at The Institute for Faith Work and Economics

“Neal and Root have filled a huge void in the critical study of Lewis by writing an introduction to Lewis’s scholarly work that should provide a guide for those interested in Lewis for years to come.” -Professor Hal Poe, Union University, and author of The Inklings of Oxford

“That there still exists neglected dimensions of Lewis’s work only attests to how masterfully multi-dimensional his work proves to be. Neal and Root have walked readers around to the lesser known, though no less important, places of Lewis’s critical corpus to show us just how necessary the ‘neglected’ really is.” -Corey Latta, author of C.S. Lewis and the Art of Writing

“Anyone who enjoys reading Lewis and wants to understand him better will not want to neglect this book!” -Karl “KJ” Johnson, Director, C.S. Lewis Institute of Chicago

“This book has been long overdue. All readers who really want to understand the depths of C.S. Lewis will find The Neglected C.S. Lewis both a valuable resource full of insight as well as a journey of joyful intellectual discovery.” -Pavel Hošek, Charles University, Prague

“Even the most informed students of Lewis’s writing will be enriched by this splendid book.” -Lyle Dorsett, Professor Emeritus, Beeson Divinity School, Samford University, and editor of The Essential C.S. Lewis

“At last! I wish I’d had a copy years ago, and I thank God that Neal and Root have produced such an indispensable and deeply insightful aid for discovering the delights of C.S. Lewis’s most important books.” -Andrew Lazo, editor of Early Prose Joy, Lewis’s first spiritual autobiography

“Don’t be put off by the term neglected, thinking, perhaps, that these works are also too difficult or unimportant. Often, the very wisdom a person or culture needs will be found in what has been ‘neglected.’” -Wayne Martindale, co-editor of The Quotable Lewis

“Reading Lewis, whether his well-known or his lesser-known writings, will enrich any reader, and for The Neglected C.S. Lewis we give glory to God and thanks to Jerry Root and Mark Neal.” -Joel Heck, Professor of Theology, Concordia University, Texas, and author of From Atheism to Christianity: The Story of C.S. Lewis

“Neal and Root have opened the doors to eight chambers of C.S. Lewis’ rich world of thought, where not many have entered in. This study is a masterpiece!” -Tibor Máhrik, University of Žilina, Slovakia

“This is an expert book about C.S. Lewis’ own expertise. It is especially good at not simply summarizing the neglected works, but at discriminating what in them matters now.” -Father Andrew Cuneo, St. Katherine of Alexandria Mission, Orthodox Diocese of the West

“This book provided the tools and perspective to experience stunning insights as I reread Allegory of Love. I am charging ahead with the others.” -Gregory Anderson, Graduate Chaplain and Professor, Wheaton College

“To know the fuller corpus of Lewis’s writings is to deepen one’s understanding of the amazing range and depth of his thinking, and to stimulate and enrich one’s own thought with a much fuller and broader understanding of the nature and comprehensive depth of a Christian worldview. Root and Neal are excellent guides to this end.” -Rolland Hein, Wheaton College Emeritus Professor of English and author of Christian Mythmakers

“If you love the writings of Lewis but don’t know these volumes, you have missed out on countless discoveries that will both delight and edify you.” -Marjorie Lamp Mead, Associate Director, Marion E. Wade Center, Wheaton College

“This book is a must-read for anyone influenced by C.S. Lewis, because it offers the rare opportunity to truly know the mind of Lewis by exploring the treasure trove of his literary roots, what he read, and how it shaped his thinking.” -Dick Staub, author, broadcaster, founder of The Kindlings

“The Neglected C.S. Lewis is a much-needed and long overdue addition to Lewis studies.” -Don King, Faculty Fellow at Montreat College and editor/author of The Collected Poems of C. S. Lewis: A Critical Edition

“We in Romania greet with gratitude this excellent book by Neal and Root!” -Denise Vasiliu, C.S. Lewis scholar and researcher in philology, at University of Iasi, Romania