The Kennedys in the World: How Jack, Bobby, and Ted Remade America's Empire (Hardcover) 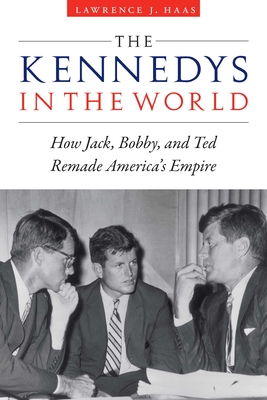 By Lawrence J. Haas
$36.95
On Our Shelves Now. Click on the title to see details.

The Kennedys in the World tells a new, rich, fascinating, and consequential story about Jack, Bobby, and Ted Kennedy. From an early age the brothers developed a deep understanding of the different peoples, cultures, and ideologies around the world; a keen appreciation for the challenges that such differences created for the United States; and a strong desire to reshape America’s response to them.

From their childhoods in the first half of the twentieth century, the brothers were prodded by their ruthless, demanding, win-at-all-costs father, Joe Kennedy, and their cold and distant mother, Rose, to learn and care about the world—and told they could shape America’s role in it. For more than six decades after World War II, the brothers shaped broad issues of war and peace as well as the U.S. response to almost every major global challenge of their times: the Soviet Union and China, the Cold War and Cuba, the Dominican Republic and Chile, Nicaragua and El Salvador, Korea and Vietnam, South Africa and Northern Ireland, and Iraq (twice).

In their time, America was what it remains today—the world’s greatest power, with roles and responsibilities that stretch across the planet. Consequently, as the brothers remade America’s empire, they invariably changed the world.

Lawrence J. Haas, an award-winning journalist and former senior White House official, is senior fellow at the American Foreign Policy Council, a columnist on foreign affairs, and a TV and radio commentator. He is the author of five other books, including Harry and Arthur: Truman, Vandenberg, and the Partnership That Created the Free World (Potomac Books, 2016), which the Wall Street Journal named one of the top ten nonfiction books of 2016.

"This extensively researched and engaging book will appeal to anyone interested in post-war American history, foreign policy, and the Kennedy family."—Thomas Karel, Library Journal

"The past has something to teach us and Lawrence Haas is a really good teacher."—Shoshana Bryen, inFOCUS Quarterly

“In The Kennedys in the World, Larry Haas expertly shows how three brothers shaped the course of America’s history. With vivid storytelling detailing previously unexplored chapters of their lives, Haas brings to life not just an era of our past but a remarkable family sailing the stormy waters of the turbulent twentieth century. Jack, Bobby, and Ted shared a tough-minded internationalism and a conviction that America belonged on the side of the oppressed and not the overlords, but each applied that legacy to different challenges in distinct ways. Now the torch has been passed to our generation and this book serves as a powerful reminder of who we are as Americans and who we can be.”—Andrei Cherny, author of The Candy Bombers: The Untold Story of the Berlin Airlift and America’s Finest Hour

“In this vivid, fast-paced study, Haas makes brilliant use of his White House insider’s understanding of politics and his mastery of narrative history. Like his superb Harry and Arthur, this important new book compels us to see these major personalities in a global context, showing not just how the Kennedys influenced the world but how the world influenced the Kennedys.”—Richard Aldous, author of Schlesinger: The Imperial Historian

“In his very engaging new book, Haas tells not only an untold story about Jack, Bobby, and Ted Kennedy but an important one. He explores why all three brothers were so interested in the world at large and reveals their dramatic impact on America’s global role over the course of more than sixty years. I recommend it highly.”—Joseph I. Lieberman, former U.S. senator

“The Kennedys in the World is not only a wonderful read, but it’s also now the definitive work on the origins and evolution of the national security ideas that Jack, Bobby, and Ted Kennedy pursued so effectively.”—Herman Pirchner Jr., president of the American Foreign Policy Council

"Camelot lives on in The Kennedys in the World."—David Luhrssen, Shepherd Express