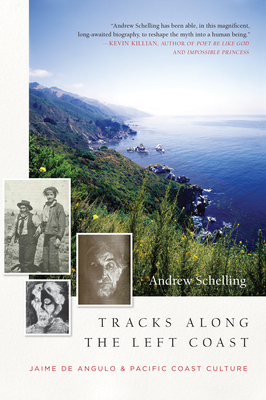 "Schelling’s biography of Jaime de Angulo—'cattle puncher, medical doctor, bohemian, buckeroo,' among other things—presents a fascinating, full-bodied portrait of a man and an era, as well as delving deep into California’s Native history. De Angulo’s isn't a household name, but in Schelling's work the man called by Ezra Pound the 'American Ovid' comes blazing to life in all his singular brilliance." —Stephen Sparks, Literary Hub

California, with its scores of native languages, contains a wealth of old-time stories—a bedrock of the literature of North America. Jaime de Angulo's linguistic and ethnographic work, his writings, as well as the legends that cloak the Old Coyote himself, vividly reflect the particulars of the Pacific Coast. In each retelling, through each storyteller, stories are continually revivified, and that is precisely what Andrew Schelling has done in Tracks Along the Left Coast, weaving together the story of de Angulo's life with the story of the land and the people, languages, and cultures with whom it is so closely tied.

ANDREW SCHELLING is a poet, essay writer, and translator. He works on land-use issues in the American West and teaches poetry and Sanskrit at Naropa University in Boulder, Colorado. JAIME de ANGULO was a cowboy, cattle rancher, horse tamer, medical doctor, psychologist, and linguist. A friend and colleague of Carl Jung, Henry Miller, and D. H. Lawrence, de Angulo was the author of Indian Tales and many other titles, all published posthumously.

Praise for Tracks Along the Left Coast

"Schelling's biography of Jaime de Angulo—'cattle puncher, medical doctor, bohemian, buckeroo,' among other things—presents a fascinating, full-bodied portrait of a man and an era, as well as delving deep into California's Native history. De Angulo's isn't a household name, but in Schelling's work the man called by Ezra Pound the 'American Ovid' comes blazing to life in all his singular brilliance." —Stephen Sparks, Literary Hub

"Jaime de Angulo! If you could corral into one volume all the legends he inspired, you would already have given us a book worth reading, but poet Andrew Schelling has been able, in this magnificent, long-awaited biography, to reshape the myth into a human being. In a larger frame, Tracks Along the Left Coast illustrates something of the troubling ease with which Modernism, hand in hand with the new science of anthropology, fixed and adapted what it imagined as 'the Primitive.' As his personal evanescence flickered and burned through the decades, de Angulo shot direction into the skies; we see why generations of Western poets, musicians, and artists were drawn to him, beyond that brilliant intellect. Through California foothills his horse galloped him, naked but for a jockstrap: if you blinked you would miss him." —Kevin Killian, author of Poet Be Like God and Impossible Princess


Praise for The Wisdom Anthology of North American Buddhist Poetry

"In a rich preface and introduction to this volume, editor Andrew Schelling insightfully places poetry firmly at the center of North American Buddhist engagement. Significantly, in the kind of bold gesture that we saw in his exceptional essay collection Wild Form, Savage Grammar,Schelling contends as a consequence of Buddhism's gradual migration and evolution throughout Southern, Southeast, Central, and East Asia, and now the Americas, poets from these regions themselves collectively comprise 'a tangle of unnamed but deeply influential lineages' within the religion's 2500-year teaching tradition… There is so much one could say about this compendium, especially from gilt-edged sages like Snyder, Kyger, and Sze. As a Wisdom edition its production values are underscored by integrity throughout, and though other Buddhist poetry collections are available these days, nothing else comes close to the excitement packed into this one. [...] [Mike] O'Connor, Master Red Pine, and Han Shan—they go together like ham 'n eggs and hashbrowns, and even tofu aficionados will find plenty to read and love in Schelling's gritty anthology, where thanks to the Buddha, the hits just keep on coming." —Pacific Rim Review of Books

"Erudite, up-to-the-moment, delightful, diverse. Everyone will find favorites they'll want to copy and share with friends." —Gary Gach, editor of What Book!?: Buddha Poems from Beat to Hiphop

"The Wisdom Anthology of North American Buddhist Poetry, edited by Andrew Schelling, provides a sweeping overview of modern poetry as viewed by writers whose lives have been influenced by Buddhist philosophy and theology. Lawrence Ferlinghetti and Gary Snyder are the most famous poets here, but don't worry if you don't recognize many of the others by name. You will recognize the power of their language, the brilliance of their observational skills and the majesty of their art." —New York Resident


Praise for The Cane Groves of Narmada River

"The Cane Groves is a brilliant selection of refined, provocative, shivery-lovely poems. It has a generous bibliography and an astute introduction that illuminates both poetics and scholarship with its insights into wealth of nature imagery, the implicit watershed consciousness, and a sense of the Wild as Tryst. What a gem of a book! It's the best gathering of Indian short poems yet."—Gary Snyder

"A teacher of Sanskrit at the Naropa Institute in Colorado, Schelling judiciously selects from a wealth of secular and courtly poems on sex and provides translations (no originals) he assures us are literal. The first section draws from the vernacular erotic poems in the Sattasai (or 'Seven Hundred Poems') collected by King Hala in the second century, and are full of rural imagery of sex by rivers and in fields, with attention to positions. The second section of poems from the Sanskrit includes more women's voices, and a more sophisticated sensibility, but follows the same self-contained lyric style, with candid phrases (itchy wombs and 'tits sagging'). Though few of these outdoorsy romances come with names of poets attached, Schelling provides an appendix on what we do know about some of them, and also adds a most useful annotated bibliography." —Kirkus Reviews


Praise for Songs of the Sons & Daughters of Buddha "Composed more than 2,000 years ago by direct disciples of the Gautama Buddha, these unexpectedly piquant poems were preserved in the earliest written Buddhist scriptures, but the men and women who chanted these songs were Buddhists long before the advent of monasteries and any organized form of the religion. Inspired by the Buddha, they turned their backs on secular life and roamed highways and city streets, living in forests and parks, begging for food, and devoting themselves to meditation. Their poems, many of which are in the first person, chronicle their rejection of wealth and domesticity for contemplation of the divine, and there is a surprising force of personality here as well as humor, gritty detail, and a heady sense of discovery. Translators Schelling and Waldman have done a superb job of freeing the living voices of the original poems from the encrustations of centuries' worth of scholasticism, presenting us with poems as fresh as morning, as provocative as night." —Donna Seaman, Booklist

"One of the most outstanding writers I have ever encountered." —William Carlos Williams

"It is no effort, of course, to be pleased by the sure touch-stories and animal drawings that are poetry, innate, humor-born, and wise." —Marianne Moore

"Digging up a forgotten local history, dusting off craggy chunks of bottom-of-the-barrel lore and tracking down faded dirt track origins for quirky place names, Schelling's poetics offers the kind of depth and bedrock sanity you need to safely make your way around these days. Perhaps that's what most enthuses me about [his] works—their spirited engagement with the worlds of the everyday, ecology, local history and politics, translation, and Sanskrit-savvy scholarly quips from the Heart Sutra—a world so diverse it begins to resemble life itself, and more, something like what it means to be a citizen (a word Schelling prefers to 'writer' or worse, 'poet') in these topsy-turvy times." —Tyler Doherty, Jacket Magazine

"Andrew Schelling is the latest incarnation in an American poetic lineage that began with the Transcendentalists and moved west with Rexroth and Snyder: the unlikely and fortuitous conjunction of wilderness expertise, the observational precision of a natural historian, homegrown radical politics, and an immersion in Asian philosophy and writing." —Eliot Weinberger

"Passionate about all facets of language." —The Shambhala Sun