Cobblestones, Conversations, and Corks: A Son's Discovery of His Italian Heritage (Paperback) 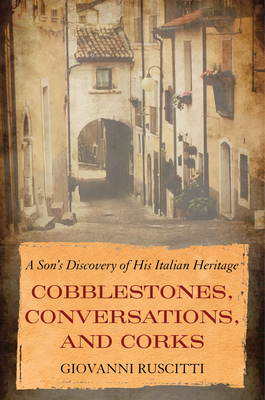 "Giovanni Ruscitti has written a wonderful book of special relevance for all North and South Americans whose ancestors have migrated from Asia, Europe, and Africa. His journey to the land of his forefathers is so meaningful not only because of the discovery of what connects us 'Americanos' to the rest of the world but also the journey within. A trip in which we all feel recognized. Bravo maestro "--Hernando de Soto, finalist for Nobel Prize in Economic Sciences, and author of Mystery of Capital

Cobblestones, Conversations, and Corks is a passionate and deeply moving story about a father-son relationship; a culture rooted in family, food and wine; and an ancestral small town in Central Italy that was left behind after World War II.

On November 11, 1943, the Nazis invaded Cansano, forcing its two thousand inhabitants to make a tough decision--fight and be killed or sent to a POW camp, stay behind as servants to the Nazis, or move into the unforgiving mountains of Abruzzo while the Nazis used their village as a home base. Giovanni Ruscitti's family chose the latter and spent the next few months living in horrendous winter conditions in the rugged mountains. When the war ended, they returned to a village so ravaged by the Nazis that, today, the town has less than two hundred citizens and remains in a dilapidated state.

In this memoir, Ruscitti visits Cansano for the first time with his family, including parents Emiliano and Maria. As he walks Cansano's cobblestones, his father's stories and life are illuminated by the town piazza, the steep valley, and the surrounding mountains. He relives the tales of his parents' struggles during World War II, their extreme post-war misery and poverty, their budding romance after, and their decision to immigrate to the US in search of the American Dream.

Ruscitti's adventure is not just an exploration of his homeland but reveals what family, culture, wisdom, and love really means. And what our heritage really tells us about who we are.