The Laser That's Changing the World: The Amazing Stories behind Lidar, from 3D Mapping to Self-Driving Cars (Paperback) 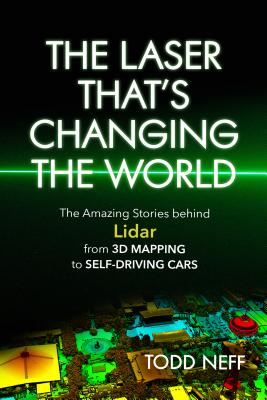 Lidar--a technology evolved from radar, but using laser light rather than microwaves--has found an astounding range of applications, none more prominent than its crucial role in enabling self-driving cars. This accessible introduction to a fascinating and increasingly vital technology focuses on the engaging human stories of lidar's innovators as they advance and adapt it to better understand air, water, ice and Earth - not to mention mapping Mars and Mercury, spotting incoming nuclear warheads, and avoiding pedestrians and cyclists on city streets.

Award-winning science writer Todd Neff invites readers behind the scenes to meet some of the great innovators who have explored and expanded the uses of this amazing technology: people like MIT scientist Louis Smullin, whose lidar bounced light off the moon soon after the laser's invention; Allan Carswell, who plumbed the shallows of Lake Erie en route to developing the aerial lidar now essential for coastal mapping and hurricane damage assessment; Red Whittaker, the field robotics pioneer who was putting lidar on his autonomous contraptions as early as the 1980s; and David Hall, whose laser sombrero on a Toyota Tundra gave birth to modern automotive lidar.

These are just some of the stories Neff tells before looking ahead to a future that could bring lidar to unpiloted air taxis, to the contaminated pipes of the U.S. nuclear weapons complex, and to satellites capable of pinpointing greenhouse gas sources from orbit. As the author makes clear, the sky is no limit with lidar, which promises to make our world safer, healthier, and vastly more interesting.

Todd Neff is an award-winning science, environment, and healthcare journalist. Previously, he was science and environment reporter for the Boulder Daily Camera and a 2007-2008 Ted Scripps Fellow in Environmental Journalism. His work has appeared in Smithsonian Air & Space, Business 2.0, Mashable, and Compliance Week, among other publications. He is the author of From Jars to the Stars, which won the Colorado Book Award for history in 2012.

“Todd Neff has dug deep to tell the fascinating stories behind a technology that has been quietly examining the world around us for years. Lidar has helped pilots land safely, found hidden archaeological sites, mapped Mars and Earth, measured changes in the Greenland ice sheet, and guided robots around laboratories. Neff ably introduces us to the inventors behind the lasers and their next big challenge: lidar serving as eyes for the self-driving cars of tomorrow. A great insight into how technology works.”

—Jeff Hecht, author of Lasers, Death Rays, and the Long, Strange Quest for the Ultimate Weapon

“Here is a grand tale of genius, grit, and serendipity—a sweeping history of the unsung invention that is transforming modern life. Just as lidar has revolutionized how we see, comprehend, and navigate our world, this timely book will open your eyes to the fast-changing technological environment that surrounds you.”

"Provides a rich history of laser scanning and lidar that will fill in many of the missing pieces of the development puzzle of this soon-to-be ubiquitous technology. GPS became mainstream, but lidar will be more important.”

"A masterful presentation of the development of optical remote sensing from its very beginning, using searchlights to study the sky. With the advent of the laser, lidar was born, and this book follows the explosive development of the revolutionary impact that lidar continues to have in fields as diverse as meteorology, surveying, 3-D imaging, virtual reality, and autonomous vehicle guidance. The reader gets to know the key people in each of these fields and effectively joins their team in responding to the complexity of the challenges and the array of advanced technologies involved. A captivating and fast-moving adventure, meticulously researched and documented, this book is essential reading for everyone interested in the expanding impact of science and technology on the modern world.”

“Neff has pulled off a seemingly impossible trick by making this complex, era-defining technology extremely easy to understand. The Laser That’s Changing the World illuminates the history—and huge potential—of lidar with clarity, style, and even humor.”

“Lidar has a fascinating history and future that impact how we live and work, all too often being underappreciated. Todd Neff deftly gets his hands around this broad-based technology that’s sure to be as fun to read as it is interesting.”

—Larry Boyer, author of The Robot in the Next Cubicle