The Hitler I Knew: Memoirs of the Third Reich?s Press Chief (Paperback) 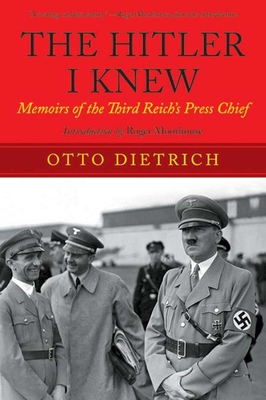 “Up to the last moment, his overwhelming, despotic authority aroused false hopes and deceived his people and his entourage. Only at the end, when I watched the inglorious collapse and the obstinacy of his final downfall, was I able suddenly to fit together the bits of mosaic I had been amassing for twelve years into a complete picture of his opaque and sphinxlike personality. If my contemporaries fail to understand me, those who came after will surely profit from this account.” —Otto Dietrich

When Otto Dietrich was invited in 1933 to become Adolf Hitler’s press chief, he accepted with the simple uncritical conviction that Adolf Hitler was a great man, dedicated to promoting peace and welfare for the German people. At the end of the war, imprisoned and disillusioned, Otto Dietrich sat down to write what he had seen and heard in twelve years of the closest association with Hitler, requesting that it be published after his death.
Dietrich’s role placed him in a privileged position. He was hired by Hitler in 1933, was his confidant until 1945, and he worked—and clashed—with Joseph Goebbels. His direct, personal experience of life at the heat of the Reich makes for compelling reading.

Skyhorse Publishing, along with our Arcade, Good Books, Sports Publishing, and Yucca imprints, is proud to publish a broad range of biographies, autobiographies, and memoirs. Our list includes biographies on well-known historical figures like Benjamin Franklin, Nelson Mandela, and Alexander Graham Bell, as well as villains from history, such as Heinrich Himmler, John Wayne Gacy, and O. J. Simpson. We have also published survivor stories of World War II, memoirs about overcoming adversity, first-hand tales of adventure, and much more. While not every title we publish becomes a New York Times bestseller or a national bestseller, we are committed to books on subjects that are sometimes overlooked and to authors whose work might not otherwise find a home.

Otto Dietrich was Hitler’s press secretary and confident. He was imprisoned for war crimes after the Nuremberg Trials in 1949 and was released in 1950. He wrote The Hitler I Knewwhile imprisoned for his crimes in Landsberg Prison. He died in Düsseldorf, Germany, in 1952.