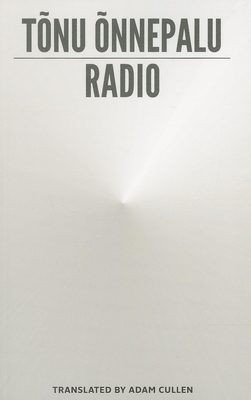 The protagonist of "Radio" is an Estonian filmmaker who is heading home after spending a decade living in Paris. He is an oversensitive and narcissistic man, openly gay, though suffering from a somewhat shaky sense of self-esteem, and stuck moreover in an ongoing identity crisis: is he an Estonian or a Parisian at heart? Is he an urban dandy or a rural hack? The story of an exile and of a writer anatomizing a homeland he perhaps wishes to repudiate, "Radio" is the perfect introduction for English-language audiences to one of world literature's great tricksters.

T?nu ?nnepalu is one of the best-known authors in Estonia. Born in 1962 in Tallinn, he studied biology at the University of Tartu. Publishing under his own name as well as a variety of pseudonyms, including Emil Tode and Anton Nigov, he began his writing career as a poet in 1985. ?nnepalu's real breakthrough came in 1993 when he (or "Emil Tode") published the novel "Border State," for which he received the annual literary award given by the Baltic Assembly.