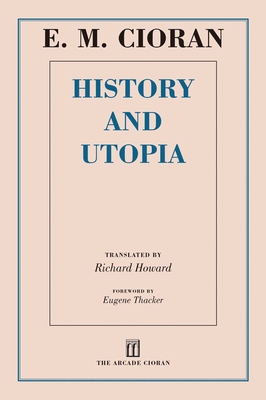 “Only a monster can allow himself the luxury of seeing things as they are,” writes E. M. Cioran, the Romanian-born philosopher who has rightly been compared to Samuel Beckett.

In History and Utopia, Cioran the monster writes of politics in its broadest sense, of history, and of the utopian dream. His views are, to say the least, provocative. In one essay he casts a scathing look at democracy, that “festival of mediocrity”; in another he turns his uncompromising gaze on Russia, its history, its evolution, and what he calls “the virtues of liberty.” In the dark shadow of Stalin and Hitler, he writes of tyrants and tyranny with rare lucidity and convincing logic. In “Odyssey of Rancor,” he examines the deep-rooted dream in all of us to “hate our neighbors,” to take immediate and irremediable revenge. And, in the final essay, he analyzes the notion of the “golden age,” the biblical Eden, the utopia of so many poets and thinkers.

Born in Romania in 1911, E. M. Cioran moved to Paris when he was twenty-six and lived there until his death in 1995. A maverick and iconoclast, he has been called “the last worthy disciple of Nietzsche” as well as a brilliant aphorist and stylist. His other books include Anathemas and Admirations, Drawn and Quartered, A Short History of Decay, The Temptation to Exist, and The Trouble with Being Born, all available in paperback from Arcade.

Richard Howard has translated most of Cioran’s books into English. He is a Pulitzer Prize–winning poet and critic as well as an award-winning translator. He lives in New York City.

Eugene Thacker is the author of several books, including After Life and Horror of Philosophy. He teaches at The New School in New York City.

“Cioran has a claim to be regarded as among the handful of original minds . . . writing today.”
—The New York Times

“Cioran may be the most distinguished contemporary in a line descending from Kierkegaard, Nietzsche, and Wittgenstein.”
—Los Angeles Times

“Cioran has a claim to be regarded as among the handful of original minds . . . writing today.”
—The New York Times

“Cioran may be the most distinguished contemporary in a line descending from Kierkegaard, Nietzsche, and Wittgenstein.”
—Los Angeles Times