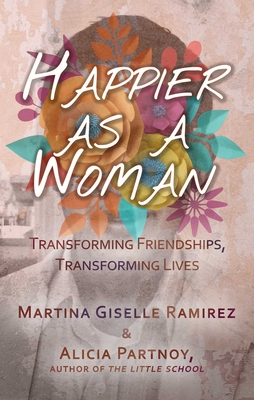 By Martina Giselle Ramirez, Alicia Partnoy
$18.95
NOT on our shelves - Usually Ships in 1-5 Days

Martina Ramirez first started wearing her mother’s shoes in secret in second grade, when everyone still knew her as Martin. Growing up in a conservative household as an adopted Mexican-American in a racially segregated city, she swore she would not be just another crime or teen pregnancy statistic. Martina lived up to that promise when she was named high school valedictorian, became a tenured professor at a prestigious university, and had a family. It was only then, after she had become established in her life and career, that she was able to finally be her true self.

Happier as a Woman is not just a story of one woman’s transition. It is a story about relationships—those she fostered with herself, those that were hurt, those that were saved, and those that would not have existed if not for Martina’s desire to be a mentor, to be the change. Martina made it her mission to pave the way for all of those that would come after her—from women seeking to break through the glass ceiling to fellow victims of emotional abuse—regardless of who they appeared to be on the outside.

It’s as though all the emotions she had to bottle up in her youth became more potent with age, and they now tell of a compelling journey of acceptance, self-discovery, and self-love. Martina’s story is artfully expressed through letters, anecdotes, and powerful interviews conducted by and written alongside her renowned coauthor, human rights advocate, and memoirist Alicia Partnoy.

Martina Ramirez is the director of the Center for Teaching Excellence and professor of biology at Loyola Marymount University (LMU), as well as an expert on spiders. She has won multiple awards for her scholarship and mentorship, including the LGBTQ+ Mentor Award from LMU’s LGBT Student Services Office in 2016. She medically transitioned to female on December 22, 2016 and has never been happier.Alicia Partnoy is a poet, human rights activist, professor, and survivor. Her book, The Little School: Tales of Disappearance and Survival, was evidence in the trials against the genocide perpetrators in Argentina. She is the author, editor, or translator of 12 books. Partnoy was on the board of directors of Amnesty International USA and PEN West. She presides over Proyecto VOS-Voices of Survivors, an organization that brings survivors of state-sponsored violence to lecture at U.S. universities.

“Happier as a Woman is a beautiful collection of essays that wander through one transgender woman's life and her journey towards living her authentic life.  Through the conversations between the authors, this book illustrates Martina’s personal struggles, joys, and the magic of finally being seen as a transgender woman while negotiating other intersecting identities. This book is a great example of the depths of personal exploration that transgender people navigate to be our true selves!” - Dr. Eli R. Green, Founder, The Transgender Training Institute
— Dr. Eli R. Green