The Documentary Filmmaking Master Class: Tell Your Story from Concept to Distribution (Paperback) 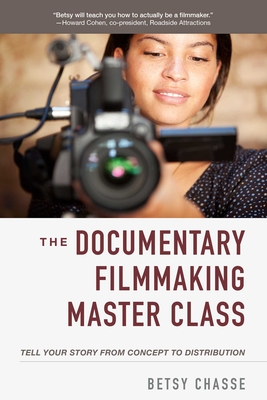 By Betsy Chasse
$19.99
On Our Shelves Now. Click on the title to see details.

"A realist with a sense of humor, Chasse is both stringent and encouraging as she covers every aspect of creating a successful production." —Booklist starred review

Documentary filmmaking requires more than just a passion for the subject, whether it be one’s personal story or that of someone else, a historical event or a startling discovery, a political movement or a heinous crime. Making a documentary and getting it in front of an audience requires determination, careful planning, money, and a strong production team. With over thirty years of experience in filmmaking, author Betsy Chasse mentors readers every step of the way with a down-to-earth approach and invaluable advice. Chapters cover topics such as:

Both novices and experienced filmmakers will benefit from this all-inclusive guide. With the right knowledge, persistence, and The Documentary Filmmaking Master Class in their camera bags, readers will not only turn their visions into reality, they’ll be able to share the results with others and navigate the process with confidence.

Betsy Chasse is an award-winning filmmaker, bestselling author, and educator. She is best known as the co-creator (writer, director, and producer) of the hit documentary What the Bleep Do We Know?! In her thirty-year career, she has produced, co-produced, or line-produced over forty feature films and documentaries, including Song of the New Earth, Pregnant in America, and The Empty Womb. Chasse has also been an instructor in documentary film at the New York Film Academy, as well as a guest lecturer at multiple universities and documentary programs around the world. She is a sought-after film and media consultant, specifically in the areas of fundraising, production, post-production, and distribution.

“Seasoned filmmaker, producer, and educator Chasse wants aspiring documentarians to know exactly how demanding documentary filmmaking truly is. A realist with a sense of humor, she is both stringent and encouraging as she covers every aspect of creating a successful production in The Documentary Filmmaking Master Class, beginning with the crucial questions of why the reader wants to make a nonfiction film. [. . .] This bracing guide will inspire new respect for the challenges and complexity of an often underestimated genre.” —Booklist starred review

“What Betsy Chasse doesn’t know about documentary filmmaking can fit in a thimble. She understands that a film must be compelling, enlightening, and visually stunning. In our current day, when everyone with an iPhone and a drone thinks they’re a filmmaker, Betsy will teach you how to actually be one.” —Howard Cohen, co-president, Roadside Attractions

“Betsy is in a filmmaking class all of her own. Not only will her methodical yet straightforward instruction establish the foundational knowledge necessary to succeed, but her wisdom and wit make every page a real treat. This is a book to read and reference again and again.” —Trina Wyatt, founder and CEO of Conscious Good and founding director of the Tribeca Film Festival

“Rarely do you find a book with just about everything you need to become knowledgeable about making a documentary film. Betsy Chasse is an expert in this field and has put together a book that is truly the master class you need if you’re going to make a film.” —Jonathan Blank, producer and director, Sex, Drugs & Democracy

“This book is a must-have for anyone considering making a documentary. The information provided is almost impossible to find in one place, if anywhere, and from someone whose experience and wisdom is invaluable.” —Straw Weisman, producer, Pregnant in America