In Their Names: The Untold Story of Victims' Rights, Mass Incarceration, and the Future of Public Safety (Hardcover) 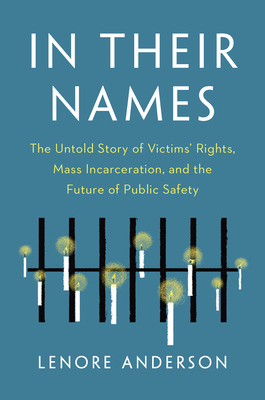 In Their Names busts open the public safety myth that uses victims' rights to perpetuate mass incarceration, and offers a formula for what would actually make us safe, from the widely respected head of Alliance for Safety and Justice

When twenty-six-year-old recent college graduate Aswad Thomas was days away from starting a professional basketball career in 2009, he was shot twice while buying juice at a convenience store. The trauma left him in excruciating pain, with mounting medical debt, and struggling to cope with deep anxiety and fear. That was the same year the national incarceration rate peaked. Yet, despite thousands of new tough-on-crime policies and billions of new dollars pumped into "justice," Aswad never received victim compensation, support, or even basic levels of concern. In the name of victims, justice bureaucracies ballooned while most victims remained on their own.

In In Their Names, Lenore Anderson, president of one of the nation's largest reform advocacy organizations, offers a close look at how the political call to help victims in the 1980s morphed into a demand for bigger bureaucracies and more incarceration, and cemented the long- standing chasm that exists between most victims and the justice system. She argues that the powerful myth that mass incarceration benefits victims obscures recognition of what most victims actually need, including addressing their trauma, which is a leading cause of subsequent violent crime.

A solutions-oriented, paradigm-shifting book, In Their Names argues persuasively for closing the gap between our public safety systems and crime survivors.

A former punk drummer turned prosecutor, Lenore Anderson is the founder and president of the Alliance for Safety and Justice. She is a former chief of policy at the San Francisco District Attorney's Office, former director of public safety for the Oakland mayor, and the recipient of a James Irvine Foundation Leadership Award and a Frank Carrington Crime Victim Attorney Award. The author of In Their Names (The New Press), she lives in Oakland, California.