The Merit Myth: How Our Colleges Favor the Rich and Divide America (Hardcover) 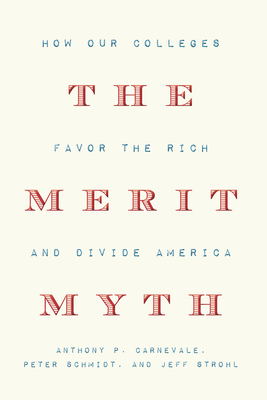 By Anthony P. Carnevale, Peter Schmidt, Jeff Strohl
$27.99
On Our Shelves Now. Click on the title to see details.

An eye-opening and timely look at how colleges drive the very inequalities they are meant to remedy, complete with a call--and a vision--for change

Colleges fiercely defend America's deeply stratified higher education system, arguing that the most exclusive schools reward the brightest kids who have worked hard to get there. But it doesn't actually work this way. As the recent college-admissions bribery scandal demonstrates, social inequalities and colleges' pursuit of wealth and prestige stack the deck in favor of the children of privilege. For education scholar and critic Anthony P. Carnevale, it's clear that colleges are not the places of aspiration and equal opportunity they claim to be.

The Merit Myth calls out our elite colleges for what they are: institutions that pay lip service to social mobility and meritocracy, while offering little of either. Through policies that exacerbate inequality, including generously funding so-called merit-based aid for already-wealthy students rather than expanding opportunity for those who need it most, U.S. universities--the presumed pathway to a better financial future--are woefully complicit in reproducing the racial and class privilege across generations that they pretend to abhor.

This timely and incisive book argues for unrigging the game by dramatically reducing the weight of the SAT/ACT; measuring colleges by their outcomes, not their inputs; designing affirmative action plans that take into consideration both race and class; and making 14 the new 12--guaranteeing every American a public K-14 education. The Merit Myth shows the way for higher education to become the beacon of opportunity it was intended to be.