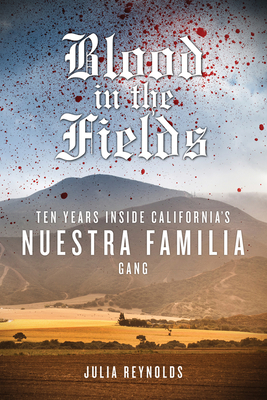 The city of Salinas, California, is the birthplace of John Steinbeck and the setting for his epic masterpiece, East of Eden, but it is also the home of Nuestra Familia, one of the most violent gangs in America. Born in the prisons of California in the late 1960s, Nuestra Familia expanded to control drug trafficking and extortion operations throughout the northern half of the state, and left a trail of bodies in its wake. Prize-winning journalist and Nieman Fellow Julia Reynolds tells the gang’s story from the inside out, following young men and women as they search for a new kind of family, quests that usually lead to murder and betrayal.

Blood in the Fields also documents the history of Operation Black Widow, the FBI’s questionable decade-long effort to dismantle the Nuestra Familia, along with its compromised informants and the turf wars it created with local law enforcement agencies. Journalist Reynolds uses her unprecedented access to gang members, both in and out of prison, as well as undercover wire taps, depositions, and court documents to weave a gripping, comprehensive history of this brutal criminal organization and the lives it destroyed.

Julia Reynolds coproduced and wrote the PBS documentary Nuestra Familia, Our Family and reported on the northern California gang for more than a decade. She currently works as a staff writer at the Monterey County Herald and has reported for National Public Radio, the Discovery Channel, the Nation, Mother Jones, the San Francisco Chronicle, and more.

"Blood in the Fields is a fascinating yet troubling look at a generation grappling with identity. It is a powerful account, one crafted with sensitivity and sharp human insights, of another Mexico within the United States. Julia Reynolds is a masterful storyteller." —Alfredo Corchado, author of Midnight in Mexico and Mexico bureau chief for the Dallas Morning News

“Both chilling and sad—so many lives lost, so many households ruined, and so many hearts torn apart. Blood in the Fields is a must-read for anybody interested in stopping the cycle of violence for safer communities.” —Gabe Morales, author, trainer, gang specialist, and founder of the International Latino Gang Investigators Association

"A sprawling, literary true-crime effort that will reward patient readers with its gloomy account of an unstoppable, violent subculture." —Kirkus


“Reynolds skillfully limns the tough lives, heartlessness, misgivings, and bad decisions made for the sake of family and the home country of Mexico. . . . A riveting tale of a monster of criminality that is still not dead but merely changing shape.” —BOOKLIST