One Marine's War: A Combat Interpreter's Quest for Humanity in the Pacific (Hardcover) 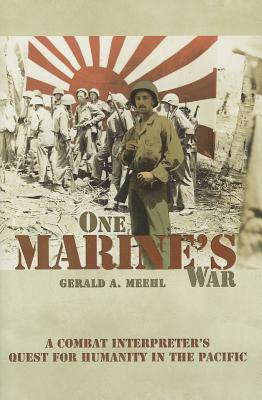 By Gerald A. Meehl
$34.95
If not in stock, we can Special Order from the publisher

One Marine's War recounts the experiences of Robert Sheeks, a Marine combat interpreter, and how he underwent a remarkable transformation as a consequence of his encounters with the Imperial Japanese Army, Nisei Japanese-American language instructors, Japanese and Pacific Island native civilians, and American Marines. It is the first time the entire story of one Marine Corps combat interpreter has been told, and it provides a unique insight into an aspect of the Pacific war that is not only fascinating history, but also a compelling personal struggle to come to terms with a traumatic childhood and subsequent harrowing combat experiences.

The son of an American corporate executive, Bob was born and raised in Shanghai until the family fled the impending Japanese occupation in the 1930s. He was emotionally scarred by grisly atrocities he personally witnessed as the Japanese military terrorized the Chinese population during the Shanghai Incident in 1932. However, his intense hatred for the Japanese military was gradually transformed into tolerance and then compassion. He was recruited out of Harvard after the Pearl Harbor attack to be a Japanese language interpreter in the Marine Corps. When he encountered kind and considerate Japanese-American Nisei instructors during the intensive course at the U.S. Navy Japanese Language School at the University of Colorado, he began to re-think his attitudes toward the Japanese. Ultimately, through an intriguing set of circumstances, he developed an empathy for the Japanese enemy he formerly despised. This began during the invasion of Tarawa where he was frustrated by the near impossibility of capturing Japanese combatants, partly because there was no way to communicate with them in their bunkers where they fought to the death. That led him to devise methods to use a combination of surrender leaflets and amplified voice appeals to convince the enemy to surrender. As a consequence, he personally ended up saving the lives of hundreds of Japanese civilians and military by being able to talk them out of caves during combat on Saipan and Tinian in 1944. He was able to find humanity in the midst of war. For his efforts he was awarded the Bronze Star with a unique commendation, certainly one of the few medals ever given to a Marine officer for saving the lives of the enemy.