Rebirth: A Guide to Mind, Karma, and Cosmos in the Buddhist World (Paperback) 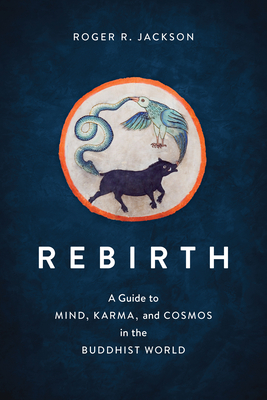 ROGER R. JACKSON, PhD, is Professor Emeritus of Asian Studies and Religion at Carleton College. He has nearly 50 years of experience with the study and practice of Buddhism, particularly in the Tibetan Buddhist tradition. His special interests include Indian and Tibetan Buddhist philosophy, meditation, and ritual; Buddhist religious poetry; religion and society in Sri Lanka; the study of mysticism; and contemporary Buddhist thought. Roger is a highly respected and beloved scholar, Dharma teacher, and writer. He has authored many scholarly books and articles, and is a frequent contributor to Lion’s Roar, Buddhadharma, and Tricycle magazines.

“This is the most comprehensive and scholarly study on rebirth and karma that I have seen and would in my opinion constitute an authoritative work on this subject for many years to come. I hope that Roger Jackson will encourage colleagues to work on Sinhala and Tamil translations of this book.”—Gananath Obeyesekere, Emeritus Professor of Anthropology, Princeton University

“The fruit of a lifetime of deep engagement with the subject, Roger Jackson’s Rebirth traces the history of Buddhist ideas about reincarnation across the Buddhist world from ancient times to the present. This is the definitive work on the topic. No other work matches it in terms of breadth and depth. Written in lively and accessible prose, and evincing Jackson’s tremendous erudition on every page, Rebirth is a major contribution to the study of Buddhism and the history of religions.”—José I. Cabezón, Dalai Lama Professor of Tibetan Buddhism and Cultural Studies, University of California, Santa Barbara

“Rebirth is the definitive study of Buddhist thought on this topic. Roger Jackson's scholarship is impeccable, attending to a vast literature with meticulous attention both to text and to context; the narrative arc takes us from pre-Buddhist Indian thought through contemporary Western Buddhist attitudes, exploring arguments for the reality of rebirth, the metaphysics of rebirth, and the role that rebirth plays in the larger Buddhist project. This is an extraordinary contribution to Buddhist Studies.”—Jay L. Garfield, Professor of Philosophy, University of Melbourne

“Since [rebirth] is both so central to the Buddhist worldview, yet so commonly misunderstood, Jackson’s new book is almost like a public service.”—Buddhistdoor Global