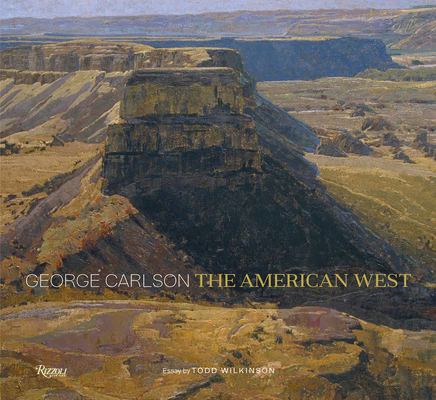 No comprehensive book of George Carlson’s work has ever before been published, making this magnificent volume an incomparable addition to the libraries of collectors and students of Western art and American landscape painting. Likened to the French and American Impressionists, who turned to nature’s beauty for relief from the industrialized world, Carlson is regarded as one of the most important American artists of his generation. His Prix de West triumphs have come in two different mediums: sculpture and, more recently, landscape painting.

Recognized as one of America’s greatest bronze sculptors, Carlson is also a master at using pastels and oils. Carlson’s tactile, textured landscape paintings are viewed as bold touchstones for a new movement taking hold in Western art—and it is inspiring new generations of Realists and Impressionists.

With nature as his muse, Carlson is an American treasure, and this book demonstrates how and why he is making his own impactful contribution to the canon of art history.

George Carlson is a renowned sculptor and painter. He studied at the American Academy of Art in Chicago, the Art Institute of Chicago, and the University of Arizona, Tucson. His works are in numerous prominent collections and shown internationally. His work has also been featured in Art of the West, Art-Talk, PleinAir, Southwest Art, Sculpture Review, and Wildlife Art magazines. Todd Wilkinson is an American journalist and founder of Mountain Journal. Wilkinson’s work has appeared in a wide variety of national publications, and he is the author of several books.

“A stunning new book celebrates the life and work of artist George Carlson. Renowned sculptor and painter George Carlson—the only two-time winner of the prestigious Prix de West, the highest honor in the western art world—is the subject of a new coffee-table… [This is] the first comprehensive book on Carlson’s work.”—SOUTHWEST ART

“Things we love. We think you’ll be thrilled to discover George Carlson’s new book. A favorite artist to many, his work has been likened to French and American Impressionists who turned to nature’s beauty for relief in an industrialized world. A frequent award winner at the famed Prix de West exhibition at the National Cowboy & Western Heritage Museum, Carlson has won many other distinguished awards in both sculpture and landscape painting. George Carlson: The American West is written by the artist, with an essay contributed by journalist and author Todd Wilkinson. Carlson is an American treasure, and this book demonstrates how he’s making an impactful contribution to the canon of art history. For collectors of Western art and American landscape painting, this comprehensive volume is an incomparable addition to one’s library.” —WESTERN ART & ARCHITECTURE MAGAZINE

“Divine Diversions: rounding up our favorite Western books. There’s power in the paintings of the phenomenal Carlson, who is widely regarded as one of the world’s greatest representational nature artists and considered by some to be as important as greats like Albert Bierstadt and Thomas Moran for his paintings of the modern American West.” —COWBOYS & INDIANS