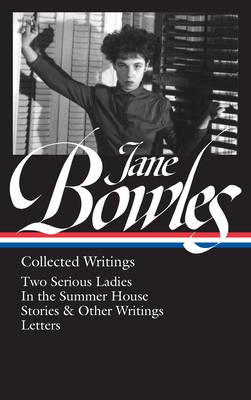 For her centenary (February 22, 2017), the most complete edition ever published of the brilliant modernist writings and evocative letters of an LGBT pioneer.

Though Jane Bowles published only one novel, one play, and a handful of stories, her genius for spare prose and vivid dialogue had an outsized influence on her contemporaries. Tennessee Williams called her "the most important writer of prose fiction in modern American letters"; for John Ashbery she was "one of the finest modern writers of fiction in any language." Now, on the occasion of her centenary, Library of America presents the most complete edition ever published of Bowles's incomparable fiction, along with an extensive selection of her frank, vivid, and funny letters. Two Serious Ladies (1943), based partly on her honeymoon in Mexico with her husband, the writer and composer Paul Bowles, follows two bourgeois American women in Panama as they jettison sexual and cultural norms in search of happiness: Christina Goering, a wealthy spinster who becomes a high-class prostitute; and newlywed Frieda Copperfield, who finds love and comfort in the arms of a young Panamanian girl. In The Summer House (1954), a play about two mothers, one selfish and ruthless, despising her dreamy daughter, the other gentle, dominated by her strong-minded daughter, was performed on Broadway in 1953 and reflects Bowles's complicated relationship with her own mother. The volume also includes five short stories, two song lyrics, a puppet play, and the nonfiction sketch "East Side: North Africa." (Paul Bowles's rewrite of "East Side: North Africa," published in 1966, under Jane's name, as the short story "Everything Is Nice," is also included as an appendix), as well as fragments from two abandoned novels, a section of Two Serious Ladies cut from an earlier draft, four abandoned stories, one unfinished play, and one autobiographical fragment. Rounding out the volume are 133 letters, including candid portraits of such friends and acquaintances as John Ashbery, William Burroughs, Ira Gershwin, Allen Ginsberg, Carson McCullers, Sylvia Plath, Paul Robeson, Susan Sontag, Gertrude Stein, Gore Vidal, Eudora Welty, and Tennessee Williams. The letters are introduced with headnotes by editor Millicent Dillon, plus 10 pages of photographs have been reproduced from the original edition of the letters.

LIBRARY OF AMERICA is an independent nonprofit cultural organization founded in 1979 to preserve our nation’s literary heritage by publishing, and keeping permanently in print, America’s best and most significant writing. The Library of America series includes more than 300 volumes to date, authoritative editions that average 1,000 pages in length, feature cloth covers, sewn bindings, and ribbon markers, and are printed on premium acid-free paper that will last for centuries.

Jane Bowles (1917-1973), author of a novel, Two Serious Ladies, a play, In the Summer House, and a volume of stories, Plain Pleasures, was born in New York City and in 1938 married writer Paul Bowles. She belonged to the New York artistic circles of the 1940s before moving with Paul to Paris and Tangier, where she knew Tennessee Williams, Truman Capote, and Gertrude Stein, among others.

Millicent Dillon, editor, is the author or editor of four books on Paul and Jane Bowles, including A Little Original Sin: The Life and Work of Jane Bowles (1981) and Out in the World: Selected Letters of Jane Bowles (1985). She is also a novelist, a Guggenheim Fellow, and a five-time O'Henry Award winner. She lives in Palo Alto, California.