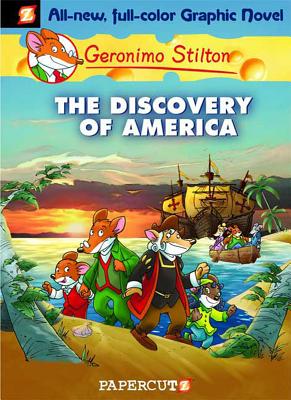 By Geronimo Stilton, Nanette Cooper-McGuinness (Translated by)
$9.99
Email or call for price.

This is book number 1 in the Geronimo Stilton Graphic Novels series.

The popular children's story appears in graphic novel form for the first time in the U.S., with stories never seen in America. Geronimo Stilton is a talking mouse who lives in New Mouse City on Mouse Island with his friends and relatives. He works at The Rodent's Gazette, the most famous newspaper in New Mouse City. In this series of comics, Geronimo Stilton travels through time in order to defend history from his arch nemeses, the Pirate Cats. These devious felines plan to travel back in time in order to change history to make them supreme rulers of Mouse Island! In his first time-traveling adventure, Geronimo and co. join Christopher Columbus on his voyage from Italy to America in 1492 in order to stop the Pirate cats and save all of the mice on Mouse Island.

Born in New Mouse City, Mouse Island, Geronimo Stilton is Rattus Emeritus of Mousomorphic Literature and of Neo-Ratonic Comparative Philosophy. He is the director of The Rodent's Gazette, New Mouse City's most widely read daily newspaper.

Stilton was awarded the Ratitzer Prize for his scoops on The Curse of the Cheese Pyramid and The Search for Sunken Treasure. He has also received the Anderson 2001 Prize for Personality of the Year. One of his bestsellers won the 2002 eBook Award for world's best ratling electronic book. In 2006 he won the Nickelodeon Kids Choice Awards and in 2008 he won the Cartoomics prize 'Beyond Comics'. His works have been published all over the globe.
In his spare time, Mr. Stilton collects antique cheese rinds. But what he most enjoys is writing books where he tells his fabmouse adventures!

“[put] Geronimo squarely on the shelf with comics that are good to you and just happen to be entertaining...extremely colourful" the pages are "dense with panels to keep the action fast-paced...nearly every panel includes intricate background detail.” —Nathalie Atkinson, LexisNexis News