How to Live: Or a Life of Montaigne in One Question and Twenty Attempts at an Answer (Hardcover) 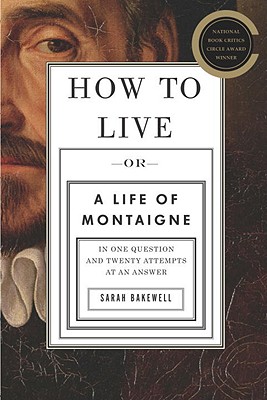 “Bakewell has written a thoroughly engaging look at the life and work of Michel de Montaigne, whose incessantly questioning approach to life is both remarkably modern and usefully instructive, even though he composed his famous essays more than 400 years ago.”
— Dale Szczeblowski, Porter Square Books, Cambridge, MA

“This is a vibrant and erudite engagement with Montaigne’s interrogation of his experience that somehow balances earnestness and cleverness while honoring the nuance of Montaigne’s thought. A book that lives up to its seemingly ironic title, teaching us to live a little more fully and a little more humbly.”
— Jeff Deutsch, Seminary Co-Op Bookstore, Chicago, IL

Winner of the 2010 National Book Critics Circle Award for Biography
How to get along with people, how to deal with violence, how to adjust to losing someone you love such questions arise in most people's lives. They are all versions of a bigger question: how do you live? How do you do the good or honorable thing, while flourishing and feeling happy?
This question obsessed Renaissance writers, none more than Michel Eyquem de Monatigne, perhaps the first truly modern individual. A nobleman, public official and wine-grower, he wrote free-roaming explorations of his thought and experience, unlike anything written before. He called them essays, meaning attempts or tries. Into them, he put whatever was in his head: his tastes in wine and food, his childhood memories, the way his dog's ears twitched when it was dreaming, as well as the appalling events of the religious civil wars raging around him. The Essays was an instant bestseller and, over four hundred years later, Montaigne's honesty and charm still draw people to him. Readers come in search of companionship, wisdom and entertainment and in search of themselves.
This book, a spirited and singular biography, relates the story of his life by way of the questions he posed and the answers he explored. It traces his bizarre upbringing, youthful career and sexual adventures, his travels, and his friendships with the scholar and poet Etienne de La Boetie and with his adopted daughter, Marie de Gournay. And we also meet his readers who for centuries have found in Montaigne an inexhaustible source of answers to the haunting question, how to live?

Sarah Bakewell was a curator of early printed books at the Wellcome Library before becoming a full-time writer, publishing her highly acclaimed biographies The Smart and The English Dane. She lives in London, where she teaches creative writing at City University and catalogues rare book collections for the National Trust.

“This charming biography shuffles incidents from Montaigne’s life and essays into twenty thematic chapters…Bakewell clearly relishes the anthropological anecdotes that enliven Montaigne’s work, but she handles equally well both his philosophical influences and the readers and interpreters who have guided the reception of the essays.” —The New Yorker

“Serious, engaging, and so infectiously in love with its subject that I found myself racing to finish so I could start rereading the Essays themselves…It is hard to imagine a better introduction—or reintroduction—to Montaigne than Bakewell’s book.” —Lorin Stein, Harper’s Magazine

“Ms. Bakewell’s new book, How to Live, is a biography, but in the form of a delightful conversation across the centuries.” —The New York Times

“So artful is Bakewell’s account of [Montaigne] that even skeptical readers may well come to share her admiration.” —The New York Times Book Review

“Extraordinary…a miracle of complex, revelatory organization, for as Bakewell moves along she provides a brilliant demonstration of the alchemy of historical viewpoint.” —Boston Globe

“Well, How to Live is a superb book, original, engaging, thorough, ambitious, and wise.” —Nick Hornby, in the November/December 2010 issue of The Believer

“In How to Live, an affectionate introduction to the author, Bakewell argues that, far from being a dusty old philosopher, Montaigne has never been more relevant—a 16th-century blogger, as she would have it—and so must be read, quite simply, ‘in order to live’…Bakewell is a wry and intelligent guide.” —The Daily Beast

“Witty, unorthodox…How to Live is a history of ideas told entirely on the ground, never divorced from the people thinking them. It hews close to Montaigne’s own preoccupations, especially his playful uncertainty – Bakewell is a stickler for what we can’t know. …How to Live is a delight…” —The Plain Dealer

“This book will have new readers excited to be acquainted to Montaigne’s life and ideas, and may even stir their curiosity to read more about the ancient Greek philosophers who influenced his writing. How to Live is a great companion to Montaigne’s essays, and even a great stand-alone.” —San Francisco Book Review

“A bright, genial, and generous introduction to the master’s methods.” —Kirkus Reviews

“As described by Sarah Bakewell in her suavely enlightening How to Live, or A Life of Montaigne in One Question and Twenty Attempts at an Answer Montaigne is, with Walt Whitman, among the most congenial of literary giants, inclined to shrug over the inevitability of human failings and the last man to accuse anyone of self-absorption. His great subject, after all, was himself.” —Laura Miller, Salon.com

“Lively and fascinating . . . How To Live takes its place as the most enjoyable introduction to Montaigne in the English language.” —The Times Literary Supplement

“How to Live will delight and illuminate.” —The Independent

“It is ultimately [Montaigne’s] life-loving vivacity that Bakewell succeeds in communicating to her readers.” —The Observer

“This subtle and surprising book manages the trick of conversing in a frank and friendly manner with its centuries-old literary giant, as with a contemporary, while helpfully placing Montaigne in a historical context.  The affection of the author for her subject is palpable and infectious.” —Phillip Lopate, author of The Art of the Personal Essay

“An intellectually lively treatment of a Renaissance giant and his world.” —Saturday Telegraph

“Like recent books on Proust, Joyce, and Austen, How to Live skillfully plucks a life-guide from the incessant flux of Montaigne’s prose . . . A superb, spirited introduction to the master.” —The Guardian

“[How to Live] is written in the form of a delightful conversation across the ages with one of the most appealing, likeable writers who ever lived.” —Independent Mail

"More than just a straightforward biography of Michel de Montaigne, Sarah Bakewell cleverly breaks away from chronology to explore the fundamental questions of living through the philosophy, beliefs, essays and experiences of the French master we often reference as the “father” of “essay.”—Cerise Press

"[A] must-read in its entirety." —Brainpickings