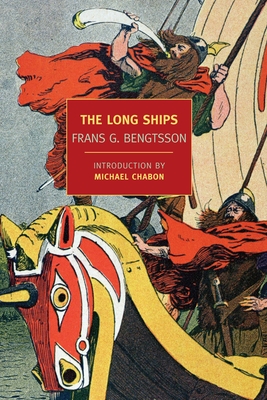 A beloved Viking saga and masterpiece of historical fiction, The Long Ships is a high spirited adventure that stretches from Scandinavia to Spain, England, Ireland, and beyond.

Frans Gunnar Bengtsson’s The Long Ships resurrects the fantastic world of the tenth century AD when the Vikings roamed and rampaged from the northern fastnesses of Scandinavia down to the Mediterranean. Bengtsson’s hero, Red Orm—canny, courageous, and above all lucky—is only a boy when he is abducted from his Danish home by the Vikings and made to take his place at the oars of their dragon-prowed ships. Orm is then captured by the Moors in Spain, where he is initiated into the pleasures of the senses and fights for the Caliph of Cordova. Escaping from captivity, Orm washes up in Ireland, where he marvels at those epicene creatures, the Christian monks, and from which he then moves on to play an ever more important part in the intrigues of the various Scandinavian kings and clans and dependencies. Eventually, Orm contributes to the Viking defeat of the army of the king of England and returns home an off-the-cuff Christian and a very rich man, though back on his native turf new trials and tribulations will test his cunning and determination. Packed with pitched battles and blood feuds and told throughout with wit and high spirits, Bengtsson’s book is a splendid adventure that features one of the most unexpectedly winning heroes in modern fiction.

Frans G. Bengtsson (1894–1954) was born and raised in the southern Swedish province of Skåne, the son of an estate manager. His early writings, including a doctoral thesis on Geoffrey Chaucer and two volumes of poetry written in what were considered antiquated verse forms, revealed a career-long interest in historical literary modes and themes. Bengtsson was a prolific translator (of Paradise Lost, The Song of Roland, and Walden), essayist (he published five collections of his writings, mostly on literary and military topics), and biographer (his two-volume biography of Charles XII won the Swedish Academy’s annual prize in 1938). In 1941 he published Roede Orm, sjoefarare i vaesterled (Red Orm at Home and on the Western Way), followed, in 1945, by Roede Orm, hemma i oesterled (Red Orm at Home and on the Eastern Way). The two books were published in a single volume in the United States and England in 1955 as The Long Ships. During the Second World War, Bengtsson was outspoken in his opposition to the Nazis, refusing to allow for a Norwegian translation of The Long Ships while the country was still under German occupation. He died in 1954 after a long illness.

Michael Meyer (1921–2000) was a translator, novelist, biographer, and playwright, best known for his translations of the works of Ibsen and Strindberg. His biography of Ibsen won the Whitbread Prize for Biography in 1971.

Michael Chabon is the author of twelve books, including The Mysteries of Pittsburgh, The Wonder Boys, The Amazing Adventures of Cavalier and Klay, The Yiddish Policeman’s Union, and Manhood for Amateurs: The Pleasures and Regrets of a Husband, Father, and Son. He lives in Berkeley, California.

"It's terrific fun, the kind of book that moves the fustiest of critics to pronounce it a rollicking yarn or something to that effect. Translation for us mere mortals: There are no boring parts to skip...Bengtsson writes the most delightful version of historical fiction...Here is the buried treasure, readers, newly unearthed. Now, go forth and read." --The Christian Science Monitor

"The literary equivalent of an action- and intrigue-filled adventure movie that won't insult your intelligence...Orm is a charismatic character, and Bengtsson is an infectiously enthusiastic and surprisingly funny writer — even readers with zero interest in the Europe of a millennium ago will want to keep turning the pages. All novels should be so lucky as to age this well." --NPR

"A household name in Scandinavian literature since its publication during World War II, the title The Long Ships is recognizable to English-speakers, if at all, from a tenuously related 1964 epic with Sidney Poitier. New York Review Books reckons to remedy that with this 500-page hunk chronicling 20 years in the life of Red Orm, a son of Skania, born during the reign of Harald Bluetooth, who first goes a-viking as a teen....And if the company of so many burly, bearded heroes can weary, Bengtsson's clear-eyed witnessing of a new world dawning does not." —L Magazine

“This extraordinary saga of epic adventure on land and sea…is a masterpiece of historical fiction…The Long Ships should be a rare delight. And not least of the rewards of reading Mr. Bengtsson's gorgeous romance is the sly humor that is sprinkled through it.” -Orville Prescott, The New York Times

Bengtsson “keeps his readers eager for the next chapter. He has a sharp eye for the picturesque and the comic in daily living, and though his style is sophisticated he often writes with a kind of festive abandon.” -Hudson Strode The New York Herald Tribune

“This is a lusty man's book that women, too, will enjoy.” -Margaret Widdemer, The Philadelphia Inquirer

“The Long Ships has many virtues of the true story-teller's art…Under the merriment and the fighting there is a great deal of scholarship as sound as it is imperceptible. Reading this marvelously good-humored ale-broth of a book, you say: this is how it must have been to be a Viking chief a thousand years ago. And not such a bad life at that.” -Burke Wilkinson, The New York Times

“Offers lusty Vikings lusting and looting, bedding and battling across Europe from the Ebro to the Dneiper.” -Time Magazine

“A splendidly robust saga of the Vikings…crackles with humour.” -Daily Telegraph

“The author and his excellent translator bring that old, warrior world alive with such vigorous enjoyment and simplicity that the deeds of those men roving about the world in their dragon ships seem as marvelous as those of our atomic age.” -Daily Telegraph

“A boldly illuminated picture of the Northmen…confidently recommended.” -The Times (London)

“A remarkable panorama of a vanished way of life.” -Times Literary Supplement

“A banquet of adventure by sea and land, with man-size helpings of battle and murder, robbery and rape.” -New Statesman

“Still the king of books about Vikings…the Vikings liked to row and sail and fight. That's what they do in this action-packed epic.” -Bookmarks Magazine

"Even though The Long Ships was first published in 1941, it remains the literary equivalent of an action-and intrigue-filled adventure movie that won't insult your intelligence...Bengtsson is an infectiously enthusiastic and surprisingly funny writer--even readers with zero interest in the Europe of a millennium ago will want to keep turning the pages."


“Since I finished The Long Ships, I’ve been kicking myself for not having succumbed earlier...a book [of] many pleasures."—Cheston Knapp, Tin House