Out and Proud in Chicago: An Overview of the City's Gay Community (Hardcover) 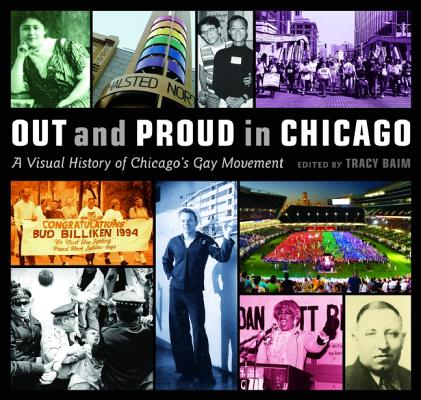 Out and Proud in Chicago takes readers through the long and rich history of the city's LGBT community. Lavishly illustrated with color and black-and white-photographs, the book draws on a wealth of scholarly, historical, and journalistic sources. Individual sections cover the early days of the 1800s to World War II, the challenging community-building years from World War II to the 1960s, the era of gay liberation and AIDS from the 1970s to the 1990s, and on to the city's vital, post-liberation present.

The histories of gay New York, gay Los Angeles, gay San Francisco, and even gay Philadelphia have been recounted in recent books. With this lush, impeccably designed coffee-table collection of essays and art, Chicago makes it to the lavender map.”
Richard Labonte

"A vivid snapshot for a generation stuck on thinking LGBT history began with those rainbow-ringed pylons lining North Halsted Street.”
Time Out Chicago

"Out and Proud in Chicago rewards every type of reader At last, Chicago gets (and deserves) its long-neglected due as the city where LGBT life flourished beyond the footlights."
James V. Carmichael, Jr, Professor, Department of Library and Information Studies, School of Information, UNC Greensboro

"I dare say editor Tracy Baim and a string of contributors achieved far more than they set out to do. They produced a well-crafted perspective and record of Chicago's gay history and culture and a model for achieving such a work for any significant segment of the city's population."
Kenan Heise, Chicago author and journalist