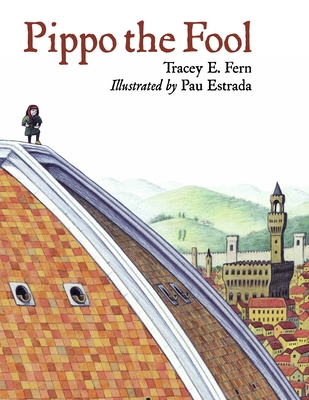 The Cathedral of Santa Maria del Fiore in Florence was a marvel of art, architecture, and engineering. But it lacked a finishing ornament, a crown--a dome! The city fathers had a solution: to invite the finest masters to compete for the chance to design a dome. The rumors of this contest reached the ears of Filippo Brunelleschi, better known in Florence as Pippo the Fool. As soon as he heard about the contest, Pippo knew it was the chance he had been waiting for. "If I can win the contest, I will finally lose that nickname once and for all!"

This book tells the story of the construction of an architectural masterpiece--Brunelleschi's Dome. Tracey E. Fern depicts Pippo's prickly personality with humor and warmth, and Pau Estrada's richly detailed illustrations bring Renaissance Florence to life. An excellent way to introduce kids to an important moment in Western engineering and history.

Tracey E. Fern writes for various magazines and is the author of children's historical books including, BUFFALO MUSIC (Clarion), DARE THE WIND (FSG), and W IS FOR WEBSTER (Melanie Kroupa Books). She lives in West Newton, Massachusetts.

♦ With a great deal of charm and buttressed by understated humor, Fern tells a fictionalized story of Renaissance architect and engineer Filippo Brunellischi and his most magnificent work, the dome of the Cathedral of Florence. When word comes out of a contest to determine who will design the dome, Pippo, a goldsmith known for his beautiful but useless oddities, is determined to win and shed his unwanted nickname. The judges decide upon his visionary design but also decree that he must work in concert with his chief rival and primary heckler, Lorenzo. Pippo is dismayed at the prospect of doing all the work and only receiving half the glory, but his determination to see his plan through to fruition wins out. Throughout, Estrada's timeless art highlights Florence's orange-roofed architecture and colorfully attired citizens. Readers won't realize just how massive a project constructing the dome really was until they arrive at the scale-shifting detail of tiny workers, scaffolds, and cranes, a scene like something from David Macaulay's The Way Things Work (1988). Although the primary drama between Pippo and Lorenzo is played out with grade-school churlishness, it offers a handy morality lesson: take joy in one's accomplishments rather than the accolades to which they might lead. An afterword fleshes out some of the historical and engineering details of the dome for those inquisitive about the Renaissance.

♦ A slice of history is served a la Florentine for the delectation of curious minds in this revealing portrait of genius Filippo Brunelleschi. Determined and stubborn, he vies with a more physically and cosmetically advantaged rival in a competition to select the designer and builder of a dome to grace Renaissance Florence's grand cathedral. Estrada's excellent watercolor and gouache illustrations detail 1400s Florence perfectly, from costumes to workshops to construction sites to the soaring towers projecting above the red rooftops crammed inside the city walls. Fern's humorous text brings Pippo's crabby persona to cranky life as he ponders, sketches, schemes, calculates, and competes his way to a glorious completed dome and lasting fame. Extended author's and illustrator's notes answer questions that may be raised by the simple text, and a short list of resources (adult materials) is appended. This neat blend of fact and fiction is asa seamlessly constructed as the intricate brickwork of the dome on the Duomo.