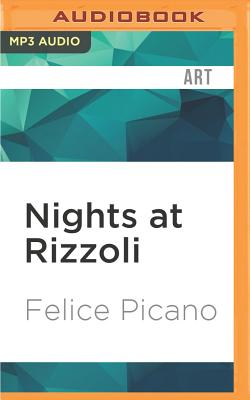 By Felice Picano, Aaron Abano (Read by)
$9.99
Special Order from the publisher

Salvador Dal , Jerome Robbins, Jackie Onassis. Gregory Peck, Mick Jagger, S. J. Perelman, I. M. Pei. Philip Johnson, Josephine Baker, John Lennon: They, and so many more who made New York City the center of the universe in the 1970s, all had one thing in common besides their adopted hometown--they shopped at a legendary palace of books, music, and art: Rizzoli Books at 712 Fifth Avenue. There, Kennedys and Rockefellers mingled with tourists and "regular" customers under the watchful gaze of sophisticated employees, themselves a multitalented, international collection of artists, scholars, and rogues.

Nights at Rizzoli is the memoir of Felice Picano, an aspiring but near-starving young writer who, in 1971, lucked into a part-time job at the stunningly elegant store via a friend. It metamorphosed into a life-changing experience, one that exposed him to some of the brightest lights in the world's cultural capital. At the store he became a key player on a stage that opened every night to a new drama that often featured romance, at times violence, and of course always the books and their readers. And when his shift was over, in this post-Stonewall, pre-AIDS era, the handsome young bookstore manager stepped from one world into another, prowling the piers, bars, and very private clubs of a different New York City.