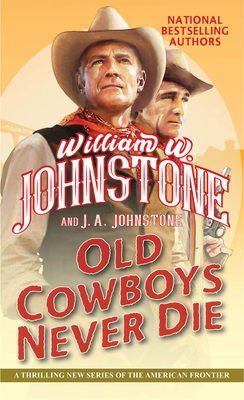 From the legendary, bestselling authors of Forever Texas comes a thrilling, action-packed novel that proves old cowboys not only get wiser with age – they get bolder and tougher too…

After thirty hard years of chasing stampedes into storms and pushing herds of half-crazy cows across the plains, longtime buddies and cattle drivers Casey Tubbs and Eli Doolin are ready to hang up their spurs. But when they get to Abilene with their final delivery of two thousand cows, the company lawyer has skipped town with their crew’s entire wages. That means there’s just one last job Eli and Casey will have to do…

Sure, pulling off a robbery is a new challenge for these old boys. But they’ve learned a lot of tricks over the years —and they’re one hell of a team. Between the two of them, they devise a scheme to hold up the lawyer on the noon train and deliver the money to the men who earned it.

Except after pulling off the perfect crime—and getting away with it—an honest, peaceful retirement stops sounding so good. Casey and Eli start thinking they may have missed their calling in life. This could be the start of a whole new career . . . as outlaws.

JOHNSTONE COUNTRY.  WHERE CRIME DOESN’T PAY . . . UNTIL IT DOES.

William W. Johnstone is the #1 bestselling Western writer in America and the New York Times and USA Today bestselling author of hundreds of books, with over 50 million copies sold. Born in southern Missouri, he was raised with strong moral and family values by his minister father, and tutored by his schoolteacher mother. He left school at fifteen to work in a carnival and then as a deputy sheriff before serving in the army. He went on to become known as "the Greatest Western writer of the 21st Century." Visit him online at WilliamJohnstone.net.

J.A. Johnstone learned to write from the master himself, Uncle William W. Johnstone, who began tutoring J.A. at an early age. After-school hours were often spent retyping manuscripts or researching his massive American Western History library as well as the more modern wars and conflicts. J.A. worked hard and learned, later going on to become the co-author of William W. Johnstone’s many bestselling westerns and thrillers. J.A. Johnstone lives on a ranch in Tennessee and more information is at WilliamJohnstone.net.