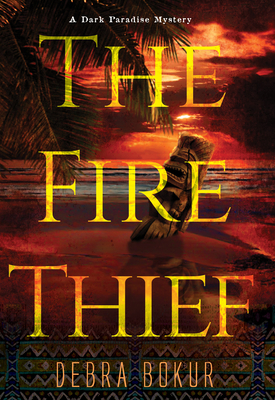 This is book number 1 in the A Dark Paradise Mystery series.

The scenery may be beautiful, but dangerous secrets are buried beneath paradise in this first thriller featuring Maui detective Kali Māhoe.

Under a promising morning sky, police captain Walter Alaka’i makes a tragic discovery: the body of a teenage surfer bobbing among the lava rocks of Maui’s southeastern shore. It appears to be an ill-fated accident, but closer inspection reveals something far more sinister than the results of a savage wave gone wrong. Now that Alaka’i is looking at a homicide, he solicits the help of his niece, Detective Kali Māhoe.

The granddaughter of one of Hawaii’s most respected spiritual leaders, and on the transcendent path to becoming a kahu herself, Kali sees evidence of a strange ritual murder. The suspicion is reinforced by a rash of sightings of a noppera-bō—a faceless and malicious spirit many believe to be more than superstition. When a grisly sacrifice is left on the doorstep of a local, and another body washes ashore, Kali fears that the deadly secret ceremonies on Maui are just beginning.

To uncover a motive and find the killer, Kali leans on her skills at logic and detection. But she must also draw on her own personal history with the uncanny legends of the islands. Now, as the skies above Maui grow darker, and as she balances reason and superstition, Kali can only wonder: Who’ll be the next to die? And who—or what—is she even on the trail of?

Debra Bokur is an author, journalist, editor, screenwriter, and illustrator. Her work has appeared in a variety of domestic and international media outlets, including National Geographic Traveler, Islands, Spa Magazine, Experience Life Magazine, Natural Home, Yoga Journal, Global Traveler, and Women’s Adventure. She is a recipient of the 2015 Lowell Thomas Travel Journalism Award. A member of the Society of American Travel Writers since 2002, Debra was part of the original team of travel correspondents at Jetsetter.com. Learn more at DebraBokur.com.

Praise for The Fire Thief

“Debra Bokur’s The Fire Thief has all the elements of a great mystery—crackling tension, brisk pacing, a vibrant setting, and a flicker of paranormal . . . or is it?”
—Wendy Corsi Staub, New York Times bestselling author

“The Fire Thief will make you an instant fan of its rock-solid protagonist, Kali Māhoe.”
—Lisa Black, New York Times bestselling author of the Gardiner and Renner novels

“An exciting blend of Hawaiian folklore and mystery. From page one to a stirring finish, Debra Bokur delivers a real page turner here. And Kali Māhoe, wonderfully rich, complicated and compelling, is the real deal. I can’t wait for her next adventure.”
—Tracy Clark, author of the Cass Raines Chicago Mystery series

“With her series debut, The Fire Thief, Debra Bokur explores the hidden back roads of Hawaii and grabs you from page one with an island procedural full of twists and turns while introducing a phenomenal and unique protagonist in Detective Kali Māhoe—tough, flawed, and perceptive. This clever and addictive novel surprises at every turn, so grab your sunglasses and enjoy the ride.”
—Edwin Hill, author of Little Comfort and The Missing Ones